From Yugipedia
(Redirected from Duel Bicycle)
Jump to: navigation, search 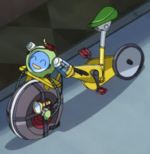 The Duel-cycle connected to Kaizo.

Yuga Ohdo's Duel Bicycle, known as the Duel Bicycle in the Japanese version, is one of his "Roads", which he uses to travel to and from school. 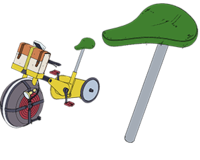 Full view of the Duel-cycle and the seat containing Kaizo's data.

The Duel-cycle is an electric bicycle that can be attached to Yuga's Duel Disk, allowing Yuga to pedal in order to power it.[1] Yuga later modified the Duel-cycle to allow Kaizo to connect to it and take control of it, including a transforming "Robot Mode" that reconfigures the bike into a crude humanoid form. However, this consumes a significant amount of power from the Duel-cycle.[2]

After Yuga disappeared into space following his final Duel with Otes, Romin Kassidy inherited the Duel-cycle. Two years after the series when Yuga finally returned, Romin, Luke and Gavin all rode the Duel-cycle to the beach to meet with Yuga.[3]