The Duel Board is a special skateboard that was introduced in episode 77 by Lester. It is designed for Turbo Duels, specifically so that children may participate.

Similar to a Duel Runner, this board uses the Field Spell Card, "Speed World". However, it is distinct from a Duel Runner in that it utilizes a Duel Disk connected to the back end of the board via a cord to function. It is much slower than a Duel Runner. 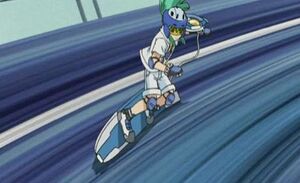 Leo's Duel Board was created by Yusei Fudo, after Leo requests to and gives the design for it. It's blue, matching his Duel Disk. 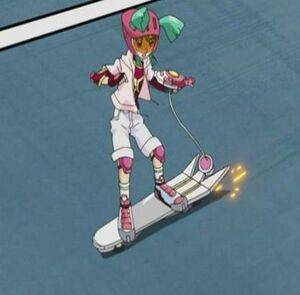 Luna's Duel Board was given to her by Lester as a gift, and was also rigged by him so that she would be forced to Turbo Duel against him. The back end of the board is colored pink, matching her Duel Disk. 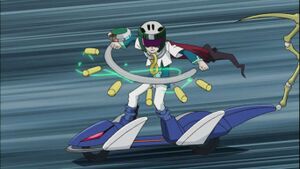 Lester's Duel Board was first seen in episode 77, when he uses it in a handicap Turbo Duel against Leo and Luna. It is designed so that the head and tail of the board resembles his "Meklord Emperor Skiel". It is also the only Duel Board that is able to go as fast as a Duel Runner.