The Duel Coaster Stadium is a stadium in the Yu-Gi-Oh! ZEXAL anime. 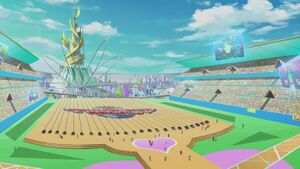 The Duel Coasters and the auditorium.

This stadium is located in Heartland. Inside, there are twenty-three Duel Coaster rails, which the World Duel Carnival finalists aboard and activate using their Heart Pieces. The tracks consequently cover all of Heartland which finalists ride through as they face off on Duels.[1] The tracks lead to an underground area, which cannot be seen by the auditorium; the Duels are then shown in big screens in the arena the rails began in, where the auditorium is located. The tracks end in four special fields: "Jungle Field", "Space Field", "Magma Field" and "Desert Field". 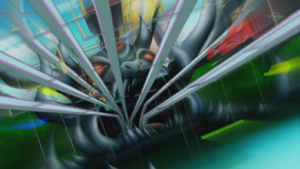 The underground entrance where the second stage of the WDC finals takes place.

In another area, the stadium also contains a Duel Tower in which the semifinals of the WDC take place.[2]