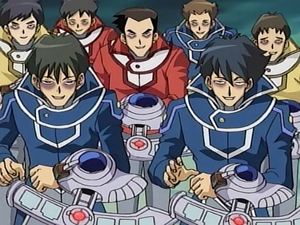 A group of Duel Ghouls. 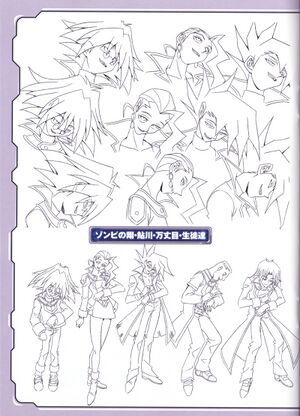 A Duel Ghoul, known as a Duel Zombie in the Japanese version, is a person who is stripped of their free will and thoughts after having their energy drained with a Bio-Band via dueling. They were used as the main force of the Martin Empire by Yubel. When a person is defeated by a Duel Ghoul, their Bio-Band drains their energy and they fall. They then become a Duel Ghoul themselves. Bio-Bands are ineffective against Duel Ghouls themselves, as they have no energy left to drain.

Appearance-wise, the eyes of Duel Ghouls have no pupils and there is dark shading under their eyes. Duel Ghouls tend to have their heads hunched over and tilted.