Earn Event Rewards by taking on Decks built by Duelists from all around the world!

Duel Island -Gladiator- is an event that occasionally occurs in Yu-Gi-Oh! Duel Links. In this event, players can earn event-exclusive rewards by setting a Defending Deck that will Auto-Duel other players, and by challenging Defending Decks built by other players participating in the event.

As hinted by Tour Guide From the Underworld and Gladiator Beast Andal, this event is also intended to acclimate cautious players to the PvP atmosphere of Ranked Duels.

This event has run two times, throughout the following time periods: 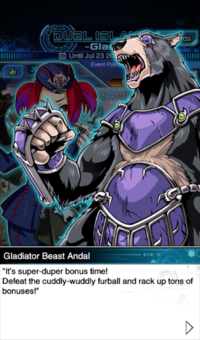 In order to participate in the event, the player must be at Stage 4 (DM) or higher.

During the event, when the player accesses the Duel Island area for the first time since the event started, they are greeted by Gladiator Beast Andal growling at them. Tour Guide From the Underworld then shows up, telling Andal to be patient, before translating Andal's growls for the player. Through Tour Guide's translations, Andal welcomes the player and introduces himself. He explains that in Duel Island, the player can Duel against Decks built by Duelists around the world, but in turn, other players will come to challenge the player's Deck. Andal then exclaims he can't wait to tear apart challengers with his "BEAR hands," before Tour Guide takes a brief moment to assure the player that her translations are "more or less" what Andal is saying. Andal continues his growling, telling the player to see how far they can make it against Decks from around the world. Tour Guide then says that although Andal's choice of words may be daunting, newcomers shouldn't worry because this event isn't actually a PvP event. At this point in the February-March 2018 event, the dialogue ends.

In the July 2018 event, the dialogue instead continues with Andal growling again. Tour Guide then asks Andal if he has something to say. Translated, Andal proudly states that he'll be joining the fight this time around, and tells the player to behold the power of the mighty Gladiator Beasts. Tour Guide dismisses this with "...Whatever." In response, Andal exclaims a surprised growl, which the player perceives as "So mean..."

During the event, when the event allows the Lvl. 50 Trespasser to make its appearances and the player enters Duel Island for the first time since that update, they are greeted by Andal growling at them. Tour Guide then shows up, translating the growls as "It's super-duper bonus time! Defeat the cuddly-wuddly furball and rack up tons of bonuses! ...And that furball is me!" Andal falls into silence at this, prompting Tour Guide to ask "What?" Andal then utters a single growl, which the player interprets as "I don't talk like that..." Tour Guide then haughtily asks if Andal has a problem, to which Andal responds with another growl that the player interprets as "Sorry..."

When the player enters Duel World for the first time since the event's conclusion, they are greeted by Andal growling at them. Tour Guide shows up immediately, telling him to "Calm it, fuzzball." Andal's subsequent growls are then translated by her, telling the player that their time on Duel Island is coming to an end. He then prompts the player to use what they've learned from the island to achieve wins in Ranked Duels, bidding them good luck. Tour Guide comments that Andal is finally making some actual sense, before informing the player that Duel Island -Gladiator- is now over. She reminds the player to use their Lottery Coins before they expire, and cheerily tells the player that she will see them around. Andal then emits a loud growl before the dialogue ends.

After the player ends their initial dialogue with Gladiator Beast Andal and Tour Guide From the Underworld, they are required to choose one of their character's Decks as their "Defending Deck." By default, the player's current Active Deck will be set as their Defending Deck. The player can choose any of their valid Decks, although they can only designate one Deck at any given time; any designated Deck that cannot be used in Duels will not be able to accept challenges from other players.

A Defending Deck includes the cards in the Deck, the character who it is assigned to, and the Deck's title. The Defending Deck seen by other players does not include any Skill or accessories that are set on the Deck that the player has set as their Defending Deck.

A Deck set as the player's Defending Deck remains as such until they change it or the event ends. In the February-March 2018 event, if the player changed the contents of their Defending Deck (including setting a different Deck), there was an unspecified delay before the change(s) appeared for challenging players; in the July 2018 event, there was no such delay.

During the July 2018 event, it was stated that the more the player Duels in the event, the higher the chance of the player's Defending Deck appearing in other players' Event Maps.

1 AP is restored every 30 minutes (even if the player is not online).

In the July 2018 event only, the player can spend EX AP (alternatively spelled "EXAP") instead of AP to participate in Duels in the event. The player can only spend EX AP if they have 0 AP remaining. EX AP can only be acquired by purchasing an EX AP Charge in the Shop using real-life currency (priced $0.99 in USD). Players can only purchase an EX AP Charge if they have 0 EX AP, and there is more than 1 hour remaining in the event, in which case it restores the player's EX AP by 8. EX AP does not carry over between events.

In the February-March 2018 event only, the player regained 1 Stamina for each Duel they won in Ranked Duels. However, this feature was removed in the July 2018 event.

Event Points are earned by completing Duels against opponents in the event, as well as the player's Defending Deck defeating challengers. Event Points are one of the ways in which the player can earn rewards in this event.

Event Points also define the player's temporary title during the event. In the February-March 2018 event, this is a purely cosmetic feature. In the July 2018 event, the player's title rank corresponds to their maximum AP (their maximum AP increases by 1 every time their title rank increases) and affects the level at which the Intruder will initially appear. The player always starts the event at the Duel Island Pioneer rank—their title does not carry over between events.

Five random Duelists are always present on the Event Map. Each of them is represented by an icon that displays the Duelist's username and Event Point worth; these icons are surrounded by a spinning ring that spins faster to emphasize Duelists with higher Event Point worths compared to others. The player can tap one of these icons to view that player's Deck name and "Ace Card" (referred to as a "pick up card" in the February-March 2018 event),[Notes 2] and have the option to Duel or Auto-Duel against that Deck (as well as backing out). If the player wishes to view a different selection of these opponents, they may tap the "Reload" button, which replaces those five Duelists with another random selection of five Duelists, but the "Reload" button will be rendered unusable for about 60 seconds afterwards. In the February-March 2018 event, after concluding a Duel with one of these opponents (including surrenders or disconnects), that opponent will be replaced by another random Duelist, but the other four will remain; in the July 2018 event, after concluding a Duel with one of these opponents, all five of these Duelists will be replaced with another five random Duelists. The Event Points these opponents can award cannot exceed 8000 (7000 in the February-March 2018 event). If the Defending Decks of five random Duelists cannot be found, 5 Standard Duelists will appear instead, equipped with the same Decks that they use in Duel World (based on the player's current highest Stage).

Additionally, a Friend from the player's Friend List can appear on the Event Map, who can be easily identified by their gold-bordered icon and will always have an Event Point worth of 5000. The player does not need to spend AP to Duel against a Friend. They are otherwise identical to the standard five random Duelists; however, in the July 2018 event, each Friend can only appear once per day on that player's Event Map. 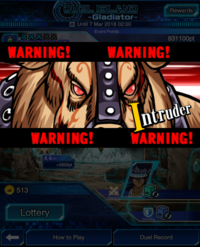 The Intruder and the Trespasser are opponents that randomly appear in the event, identified by their green-bordered icons and their appearances as monsters. Phantom Beast Wild-Horn appears as the Intruder and Gladiator Beast Andal appears as the Trespasser. In the February-March 2018 event only, the player must spend 1 Stamina to Duel this kind of opponent; in the July 2018 event, the player does not need to spend any AP.

If the player defeats the Intruder or Trespasser, the player can unlock its appearance at its next level; the next time that opponent appears, it will use its next-highest level Deck (normally to a max of Level 40). This opponent will occasionally appear using the Deck of the level below its highest level Deck that the player has unlocked (e.g. if the player has unlocked up to the Intruder's Level 40 Deck, it may still appear using its Level 30 Deck, but not its Level 20 Deck). Higher-level Decks award more Event Points; their Event Point worths by level are as follows:

In the February-March 2018 event, the Daily Bonus consisted of 1 Stamina Potion.

There are two methods of earning rewards from this event: rewards earned through accumulating Event Points, and rewards received from the Event Lottery.

The following rewards could be earned through accumulating Event Points:

Throughout the event, the player also receives Lottery Coins (known as Island Coins in the February-March 2018 event) whenever they earn Event Points, at a rate of 1 coin for every 100 Event Points earned (rounded up). The player can spend these Lottery Coins at the Event Lottery, where 1 random reward is issued per every 30 Lottery Coins spent. These random rewards can be purchased one at a time or 10 at a time (if the player does not have enough coins to draw 10 rewards, they can instead draw as many rewards as possible if more than one). The rarity of a reward is indicated by the coloring of its panel when received, with rainbow-colored being the highest rarity, gold-colored being the medium rarity, and neutral-colored as the lowest rarity.