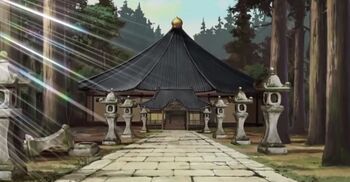 The Duel Sanctuary, known as the Duel Lodge (, Dyueru An) in the Japanese version, is a dojo owned by Roku. It is located in the mountains around Heartland City. Roku carved many statues that honor famous Duel Monsters cards from previous eras. With the holographic technology of Augmented Reality, he can make the statues come to life for Statue Duels.[1]

An alternate version of Duel Sanctuary appears in Yu-Gi-Oh! ARC-V.[2]

Some of the statues are:

Roku trains students to better themselves at Duel Monsters and other tasks. His former disciples include Kaze.[1] Hidden within the Lodge is a powerful Deck of cards, which Roku gives to Yuma Tsukumo after the boy defeats Kaze.[3] Although he wasn't trained there, Astral also considers himself a disciple.[1]