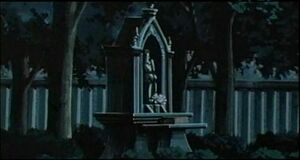 The Duel Statue, known as the Duel Shrine in the Japanese version, is a place in Yu-Gi-Oh! 5D's associated with a famous story, where people go to make wishes.

Carly Carmine went to the statue to collect information as a reporter. Sometime after, she goes and tells Jack about the shrine. Marco prayed here to the Duel Goddess. He left his cards asking her to use it to defeat Don Piero, who had previously repossessed many of Marco's family's belongings through fraud dealings. After he left, Jack Atlas took the Deck and used some cards from in it in concert with his own to defeat Piero.[1]

The Duel Statue appears in the video games Yu-Gi-Oh! 5D's Tag Force 5, 6 and Special. The player can put cards in the statue when card limits are exceeded.