A Duelbot, known as a Riding Roid in the Japanese version, is a type of robot used by Sector Security in order to assist them with crimes involving Duel Runners. It is later used by the Three Pure Nobles as part of their secretive plans.

Trudge named this type of robot a Duelbot and revealed that these special robots are being used by Sector Security. In actuality, they are being mass produced by Primo, as a part of his plans to speed the activation of the Grand Design by Dueling with full force. 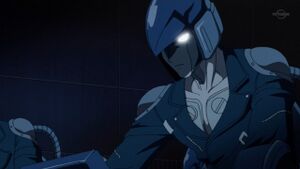 The first Duelbot seen is Ghost, which was used to terrorize and defeat Turbo Duelists, causing them to crash with major injuries. Its identity was revealed after Yusei Fudo defeated it in a Turbo Duel. After the defeat, Ghost rode out of the Dueling lane and crashed into some trees. After Yusei, Jack Atlas, and Crow arrived, Crow touched the robot's metal arm, which fell off.

This robot not only has been disguised to look like a human being, but it also possesses the characteristics and qualities of a Turbo Duelist. Its Deck was actually Primo's Deck as part of his plan to test it out on other Duelists. After Ghost was beaten, Primo took back his Deck and even destroyed the memory chip inside Ghost to remove any evidence Sector Security might find.

Before it blew up, there was a factory that was mass producing robots similar to Ghost, it seems that they all were able to escape and wreck havoc, as part of Primo's plans.

One of these robots was even disguised and impersonating Jack Atlas himself, causing the same chaos on the Duel highway as Ghost had previously. This imposter was able to defeat the original at first, but later lost during their rematch after Jack chose to use "Trust Guardian" as opposed to not doing so in the first Duel. At the end of that Duel, the overwhelming attack of Jack's "Majestic Red Dragon" destroyed the robot. The robot's Duel Runner was destroyed in the explosion caused by the attack and its Deck (created by Lester) was automatically disintegrated into nothingness.

After the Duel between Team 5D's against Team Catastrophe, Primo unleashes his army of this bots whom he dubs "Diablo". These robots then face off against Turbo Duelists through Battle Royal Duels. All of these robots use "Ally of Justice" monsters during their Duels. Nearly all of them were destroyed thanks to the efforts of Yusei, Jack, Crow, Kaz, Vizor, Sherry, and Elsworth. 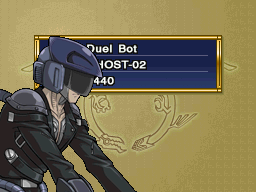 The Duel Bot, in Over the Nexus

One Duel Bot not associated to the Diablo appears in Yu-Gi-Oh! 5D's World Championship 2011: Over the Nexus as a Turbo Duel opponent unlocked by finishing a side quest after the end of the main storyline.