From Yugipedia
Jump to: navigation, search
This article is about the object. For the card, see Duelist's Glove. 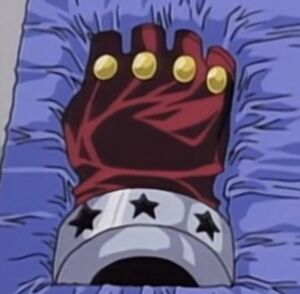 A Dueling Gauntlet was a glove worn by Duelists that took part in the Duelist Kingdom tournament. It was used to hold the Star Chips that the Duelist earned by winning Duels. The Star Chips are placed on the wrist of the gauntlet, which holds a total of ten. Joey Wheeler took Weevil Underwood's Gauntlet after the latter was defeated by Yami Yugi, as Joey himself did not have a glove to begin with, being a stowaway participant; the same case happened with Bandit Keith taking either Sid or Zygor's. 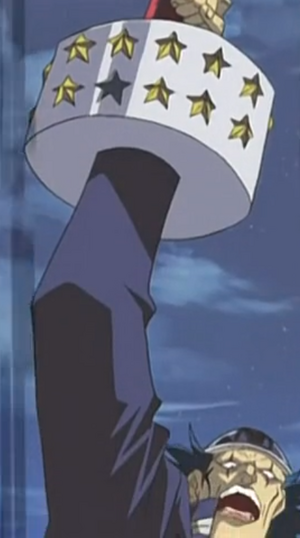 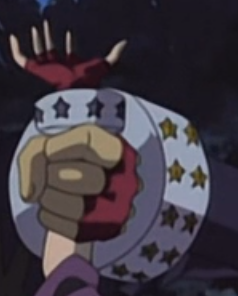 An Eliminator's Gauntlet compared to a normal one.

Duelists hired by Pegasus to be Eliminators were given special gauntlets that could hold more Star Chips than normal. For example, PaniK had two double-sized gauntlets, allowing him hold up to forty Star Chips (the number of extra chips considering only four finalists were allowed), instead of the usual ten. However the Impersonator of Death and the Paradox Brothers wore regular gauntlets of ten chips. In the manga, PaniK's gauntlet also housed a wire that he used to wrap around his opponent's neck, to prevent them from escaping, and to strangle them if they anger him or, as Dark Yugi wagered his life, kill them for losing.