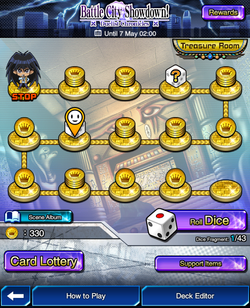 While inside the Treasure Room, movements only cost 1 Dice Fragment, instead of the usual 7, and all spaces (except the first and last) have either Millennium Coins or Support Item. Some spaces have extra Millennium Coins, and can be identified by the icon of several stacked coins. Mokuba Kaiba is in the last space, and 125 and 250 Millennium Coins for being defeated at Levels 20 and 40, respectively.

Rewards can be earned by accumulating Event Points from winning Duels.

The player could challenge Yami Yugi in a Divine Trial. The following rewards can be obtained by defeating him a certain number of times.