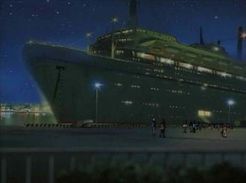 The ship in the manga and anime

Participants for the Duelist Kingdom tournament gathered at Domino Pier and boarded the ship. A number of people who were not staff or participants also boarded. In the manga, they did so without hassle. In the anime, Joey Wheeler was about to be removed by black suits for not being a participant, until Yugi Muto gave him one of his Star Chips. And Téa Gardner, Tristan Taylor, and Bakura Ryou snuck onboard.

Despite the ship's size, the tournament participants had to spend the night on the common room floor, except for the finalists from the recent Japanese national championship. Joey Wheeler and Mai Valentine each complained about this. However Mai was able to succeed in getting a room after tempting Rex Raptor to gamble his away in a Duel with her.

On the deck, Weevil Underwood asked to see Yugi's "Exodia" cards, only to throw them overboard. Joey jumped into the water to recover them, but only succeeded in getting two of them. This prompted Yami Yugi to target Weevil as his first opponent in the tournament.

The ship serves as the first stage in the video game, Yu-Gi-Oh! Duel Monsters.