Duelist Road: Clash at Crash Town is an event that occurred in Yu-Gi-Oh! Duel Links, based on episodes 86-92 of the Yu-Gi-Oh! 5D's anime. It allowed the player to unlock Kalin Kessler as a playable character. 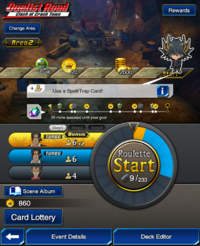 During this event, the player earns Harmonicas by Dueling in Duel World (except at the Gate or against The Vagrant). Each day, the player is awarded 15 Harmonicas for entering the Duelist Road area; part-way through the event (August 3, 2020 onward during the first run), the amount was increased to 25.

The Duelist Road area is divided in 3 Areas. Areas 1 and 2 were available from the start of the event, while Area 3 was only made available part-way through the event (July 30, 2020 during the first run, October 24, 2020 during the second run). The player must complete each Area in order unlock the next, although the player can switch between unlocked areas at any time.

In order to progress in each Area, the player must spend Harmonicas to spin a roulette, which will put the player against a certain Duelist, depending on where the roulette landed. After the Duel, regardless of its outcome, the player will move a number of spaces assigned to that Duelist. Winning the Duel, completing any of the Duel Missions, and finishing a Duel on the Hard difficulty, will let the player move more spaces. Certain areas of the roulette will also double or triple the number of spaces moved.

In addition to the rewards from spaces, the player is also awarded with Lottery Coins after each Duel. These coins can be used on the Lottery to get random rewards, with 1 reward for each 30 Lottery Coins spent. Multipliers from the roulette are also applied to the number of Lottery Coins earned. 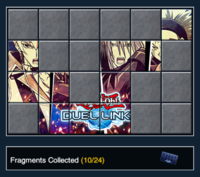 The Game Mat being completed with each Fragment collected

Certain spaces reward the player with a Fragment. After collecting all 24 Fragments, the player is awarded with a Game Mat.

The player can spend a multiple of 30 Lottery Coins (max. 300 at a time) to obtain one random reward for each 30 Lottery Coins spent. The Lottery remained available until after the event's conclusion, and could be accessed from the "Information" menu.

In Area 2, Lawton is Dueled in a Turbo Duel.

In Area 3, Lawton is Dueled in a 2-on-1 Duel with Kalin Kessler.

Skill: "Avenger from the Void"