Duelist Road: The Dark Side of Dimensions 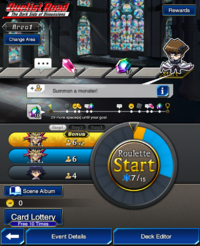 The Duelist Road area is divided in 5 Areas. Areas 1 and 2 were available from the start of the event. Area 4 was released on November 6, Area 5 on November 8, and Area 6 on November 10. The player must complete each Area in order unlock the next, although the player can switch between unlocked areas at any time.

After completing the Duel, the player will move a number of spaces assigned to that Duelist if they win, or half that number if they lose. Completing Duel Missions adds additional movement. The movement received is multiplied by the Bonus multiplier, after adding any movement from Duel Missions.

These coins can be used on the Lottery to get random rewards, with 1 reward for each 30 Lottery Coins spent. Multipliers from the roulette are also applied to the number of Lottery Coins earned.

Certain spaces reward the player with a Fragment. After collecting all 24 Fragments, the player is awarded with Game Mat: Kaiba, Yugi, and Aigami.

Duels in Areas 2, 3, 4, and 6 are Dimension Duels, which means that Level 5 and higher monsters do not require Tributes to Normal Summon. Duels in Area 6 are both Dimension Duels and 2-on-1 Tag Duels, with Seto Kaiba (DSOD) as a tag partner.

The player can spend a multiple of 30 Lottery Coins (max. 3000 at a time) to obtain one random reward for each 30 Lottery Coins spent. The Lottery remained available until after the event's conclusion, and could be accessed from the "Information" menu.

The Daily Missions were replaced by the following on November 13, 2021, for the remainder of the event.