The dice and cards are the most important things in this game. The dice's crests are in different colors they are: 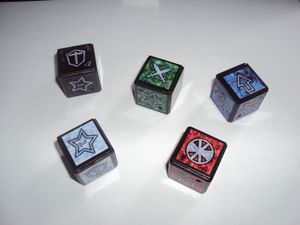 However, the cards just say the monster's type instead of coloring the card the same as the crests on the die.

In the North American version of the real world game the colors don't say the type but the level of the summoned monster. The Japanese version, however, sticks to the original color theme.