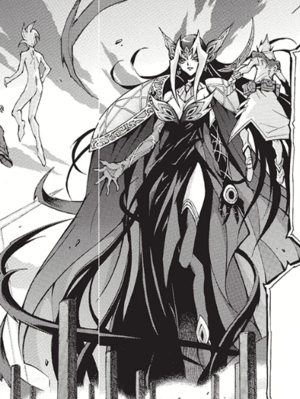 E'Rah appears as a huge slender and busty woman, with long dark hair, light colored bangs and a pair of feather-like accessories on each side of her face. She wears a long dark dress with armour-like shoulder pads, with a larger, more designed pad on her right shoulder.

E'Rah is a powerful deity capable of scenting "hope" and destroying its sources. She can also use humans as vessels, granting them dense dark powers and being able to manipulate them.[1] She is also capable of allowing "Number" monsters to influence their wielders, regardless of what kind of protection they have. This is seen when "No. 95: Galaxy Eyes Dark Matter Dragon" possessed Kaito Tenjo despite the protection the latter's Photon Hand would have otherwise granted him.[2]

E'Rah's name has the same pronunciation as "error" in Japanese (the lowercase "e" further supports the idea, since "error" is a noun and doesn't begin with a capital "e").

E'Rah fed off the heartbreak suffered by Dr. Faker when he opened the door to the Astral World, and she had a hand in the loss of Haruto Tenjo's soul. When Kazuma Tsukumo opened the door to the Astral World, E'Rah learned that they were sending a messenger, Astral, to confront her. As a result, when Astral arrived on Earth, E'Rah scattered his memories in the form of the "Number" cards and used them. Six months prior to the Numbers War, E'Rah encountered the disillusioned Kyoji Yagumo before he was about to enter a tournament and gave him the nine "Numbers" she had acquired and gifting him with him several supernatural abilities. Her possession caused Yagumo to desire the destruction of both Earth and the Astral World and to believe that their existence had no value. 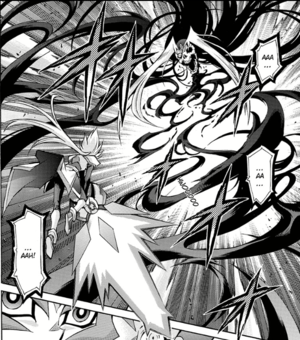 During the 3 vs. 1 Duel between Yuma Tsukumo, Ryoga Kamishiro, Kaito Tenjo and Kyoji Yagumo, when Kyoji was about to lose, E'Rah appeared and took over him to continue the Duel, confronting her enemies for the first time.[3]

After being defeated by Yuma and Astral in their ZEXAL form in a Duel where she managed first to take out Kaito and Shark, she seemingly vanished. But in reality, she was sealed inside Astral, whose mission demands of him to seal himself in a state of complete stasis for eternity, to make sure she could never escape again.

Prior to the events of the manga, E'Rah came into possession of "Number 70: Deadly Sin" and 8 other blank "Number" cards. All of these were passed onto Kyoji Yagumo six months prior to the Numbers War.[4]

E'Rah runs a Strain/Anti Deck, which creates "shadows" of her opponents' monsters stronger than their original counterparts, reflecting her belief that light will always produce shadow, and the shadows will always be stronger than the light. Said monsters are called "E'Rah Monsters"; in Japanese, "E'Rah" has the same pronunciation as "error", so her shadow monsters can be understood as "error" monsters. In a pinch, E'Rah can use the effect of "Strain Endo" to summon multiple "Anti" monsters, which she then layers to summon "Anti-Hope, God of Despair". Some of her Spells refer to three of the elements of the ancient priests who opposed her: land, sea and sky. Her "Anti" monsters also follow this aesthetic, with allusions to all the elements, including light.