From Yugipedia
(Redirected from Earth)
Jump to: navigation, search
"Earth" redirects here. For the character, see Earth (character). For the Alignment, see Earth (Alignment). For the planet, see Earth (planet). For the archetype, see "Earth" (archetype).

EARTH ( Chi) is an Attribute in Yu-Gi-Oh!. EARTH monsters are typically thematically associated with conceptual themes of reliability and industriousness, as well as physical themes that relate to earth and nature. However, EARTH is also often used as a "default" or "neutral" Attribute, applied to monsters whose traits are not significant enough for them to be specifically categorized into any other Attribute.

The Monster Types typically associated with EARTH are Dinosaur, Warrior, Rock, Beast, Beast-Warrior, Psychic, and Plant are the most common EARTH monsters, although Insect, Zombie and Machine are also quite frequent.

In terms of card effects, cards specifically themed as EARTH (and not as a "neutral" Attribute) typically have effects associated with defense, with many high-DEF monsters having the EARTH Attribute.

In some card effects (e.g. "Missus Radiant") and in certain video games, the EARTH Attribute is positioned as the opposite of the WIND Attribute. 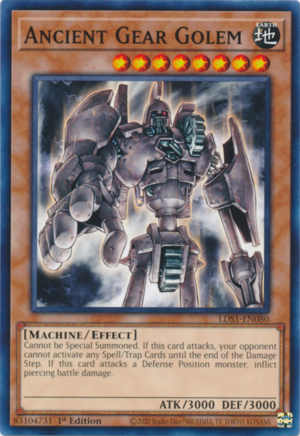