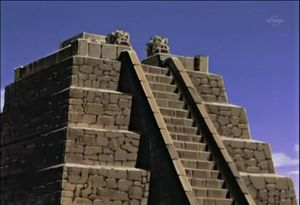 The Earthbound Immortal Shrine was built following the events of the Dark Signers.

After the Signers and Dark Signers battle, the Earthbound Immortals were sealed once again on the Nazca Lines, Greiger and his siblings constructed this shrine to pacify the Evil gods and to prevent them from being reawakened.[1] 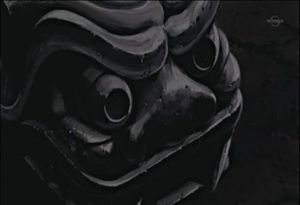 Quetzalcoatl carved on the shrine.

Greiger also carved an image of Quetzalcoatl on top of the shrine, believing that this God could protect the shrine.[1] 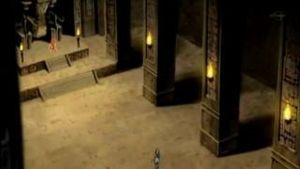 Yusei Fudo and Jack Atlas came here, while visiting Greiger, who had a dream of Jack dying.[1] The Familiar of Red Nova met Jack at a nearby village and told him to come to the Shrine to receive power. Jack went to the top of the Shrine and following a lightning strike, a hole was broken at the top, giving him access to a hidden chamber that was not there when Greiger built the structure. Inside Jack faced the Familiar in a ritual Duel, where if Jack won he would get power and if he lost his body would be given to the Crimson Devil.[2]

Towards the end of the ritual Duel, Red Nova appeared wanting to take Jack. However the Crimson Dragon emerged from Quetzalcoatl's tablet to protect Jack. Jack used Blazing Soul to seal Red Nova into a card and merge it with "Red Dragon Archfiend" in a Double Tuning to form "Red Nova Dragon".[3]

After Jack defeated the Familiar, the shrine came crumbling down around Jack, Yusei, Greiger and Max. However the four of them were protected by the Crimson Dragon. The shrine was destroyed completely, although the tablet was left intact.[3] 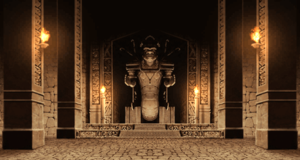 Inside the shrine in Tag Force 6.