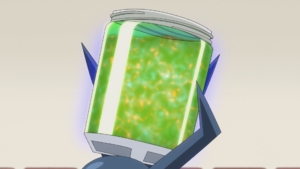 The Earthdamar sealed inside a container.

The Earthdamar (アースダマー Āsudamā) is a mysterious substance in the Yu-Gi-Oh! GO RUSH!! anime that seems to be a part of Yuhi Ohdo. Yuhi had it stolen from him by Tell Kawai, and has been searching for it.[1] It is initially a mystery as to what the Earthdamar is; Yuhi refuses to explain when asked by Yudias Velgear, and Mr. Tazaki has admitted he doesn't know what it is himself.[2]

The Earthdamar is a translucent blackish-purple miasma-like fluid. It can take on a shape vaguely resembling Yuhi Ohdo's silhouette whenever it is let out of its container.[3]

The Earthdamar has the ability to materialize Rush Duel Monsters, such as "Magical Sheep Girl Meeeg-chan", into the physical world and allow said monsters to actually hurt the opponent, as shown in Yudias' Duel with Chupataro Kaburagi.[4] It is further clarified that exposing or "soaking" a Duel Disk in the substance transfers this power to it and that the strength of the Duelist's heart is central to controlling it; Chupataro (dismissed as weak by Mitsuko Hiramori) had his Duel Disk soaked for thirty minutes and suffered severe ill-effects as a result, while Zuwijo zir Velgear (stated to be far more strong-willed) exposed his Duel Disk for thirty-three hours and used the power harmlessly. Zuwijo dubbed this ability "Egil Velgear". Further using the Earthdamar allowed Zuwijo to "clad" himself with the physically materialized "Voidvelgr Requiem", entering the monster and controlling its movements with this own.[5]

The effects of Earthdamar can be trasmitted over an area at least the size of a town via radio waves, as Zuwijo tried to use the Mutsuba Tower, an under-construction control facility for Rush Duel communication data, to materialize monsters all over Mutsuba Town.[6]