Echo (エコー, Ekō) is Adrian Gecko's childhood friend. She eventually became the captain of the Gecko's spy submarine. After Adrian decided to stay in the alternate dimension, Echo went to rescue him. After joining Jaden's group she sacrificed herself so that Adrian could summon the spirit of Exodia the Forbidden One. Yubel later used Echo's darkness to regain her energy. She was one of the few people who did not return after Jaden merged with Yubel.

Echo also carries a locket around her neck with a picture of Adrian enclosed in it.

Echo deeply admires Adrian for putting his younger brother's needs ahead of himself despite the fact that he will always be considered lesser than the true heir to the Gecko family name. She sees that he is fit to rule the world as a king, though his responsibilities to his sibling prevent him from doing so. In the dub, she states that Adrian must remain in the alternate dimension to remind him of his goal.

Her name is derived from the name of the nymph Echo in Greek mythology.

As Chancellor Sheppard arrived at Duel Academy after it had vanished into the alternate dimension, she attempted to kidnap him to use him as hostage, but Maximillion Pegasus arrived in a helicopter and his men restrained her.

When Maximillion Pegasus was creating the "Rainbow Dragon" card, Echo threatened to blow up the tablet and everyone around it to prevent Adrian from returning, but Pegasus' men restrained her. 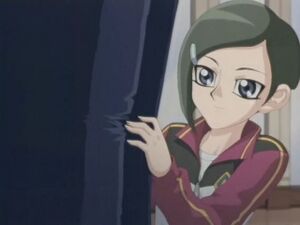 Echo in her childhood.

When Jaden Yuki and his companions open the portal to the third alternate dimension in search of Jesse Anderson, she and Dr. Crowler get sucked in as well, having been nearby. She later meets up Aster Phoenix and Zane Truesdale only for Adrian, now zealous on fulfilling his ambition, to show up as well. During Adrian and Aster's Duel, Echo is willingly sacrificed by Adrian to the spirit of "Exodia the Forbidden One" to make it his servant. Despite this, her spirit still loved him. Her spirit later aids Adrian in his Duel against Jesse when he's possessed by Yubel, but only ends being used by Yubel to recover its power when the psychopath absorbs the darkness in her soul. Adrian and Echo are the only characters who died in the alternate dimension that were not stated to return.

It is unknown if Echo ever had a Deck or not, but she has been seen using the "Short Circuit" card on multiple occasions.