Echo (エコー, Ekō) is a program in the Yu-Gi-Oh! VRAINS anime, created by Windy. Windy creates multiple Echoes to use as guards in his fabricated Cyberse, while using his primary one to Duel for him.

Echo appears as a robed humanoid with a steel ring for a head and a miniature steel face without eyes hovering inside it. Its body is largely dark green, with a turquoise coat patterned with gold, grey hands, gold wristbands, and large turquoise feet with gold turned up toes, cuffs, and heels, and a white pattern on its chest. It also takes on the shadowed form of "Paradox Hydradrive Atlas". Although Echo does not appear to have a visible Duel Disk, it materializes the magenta circle of light above its wrist when it interacts with Windy's Deck.

During its first appearance, Echo's only dialogue was to repeat the last thing that Windy has said, hence its name, though this was dropped in its later appearances. Windy uses Echo's "hand" as a pedestal, standing on it as other Ignis have been shown to stand in the Duel Disks of their partners. 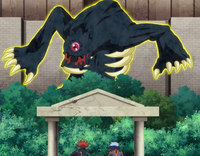 Echo in the form of "Paradox Hydradrive Atlas".

Windy created Echo and modified his code to create an illusion of "Paradox Hydradrive Atlas", the monster that destroyed Cyberse. He used the illusion to scare Ai and Flame when they came to the Wind world with their partners, Playmaker and Soulburner. After doing so, Windy told Echo to resume his normal form. He did, and Windy proceeded to show his guests around while sitting on Echo's hand. Echo simply repeated everything that Windy said afterwards.[1]

Echo continued in this same role when Ai was lured into a meeting with Windy and Lightning.[2] Windy had created multiple copies of Echo and utilized the others as guards for his fabricated Cyberse. These guards would be Dueled and defeated by the Knights of Hanoi.[3] Windy's Echo was dissolved when Windy was defeated by Varis.[4]

Windy recreated another Echo in Mirror LINK VRAINS after recovering from his injuries.[5] This Echo filled the same purpose as previously, serving as Windy's means of transportation.[6] Echo accompanied Windy to Duel Soulburner, once again serving as the means for Windy to play and interact with his cards.[7] After Windy was defeated by Soulburner, the final Echo was erased due to losing in Mirror LINK VRAINS.[8]