Eliphas is a character in Yu-Gi-Oh! ZEXAL and the will of the Astral World. As such, he governs the entire realm and aims to Rank it up by destroying the Barian World. 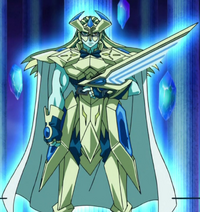 Eliphas is physically large and muscular with teal and beige heterochromic eyes and long flowing blond hair. He wears gold plated sleeveless armor with large sapphires at the pauldrons and faulds and a large white cape at the back. His half helmet is crowned with three sapphire-covered tips and he wields an acute angled Duel Disk with a cyan interior. 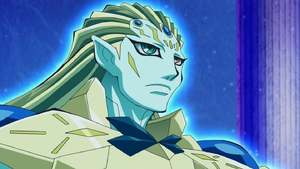 Eliphas, without his mask.

When his helmet fell off, it is revealed that he has one blue gem on his forehead and two above his temples, as well as marks on his face similar to but noticeably different from the ones on Astral's.

Eliphas is fanatical in his disdain for Chaos and the beings that possess it, especially those he perceives as menaces to the Astral World. He even threatens his own people such as Enna after Yuma healed them with his Chaos energy, as they have become infected by it and must be quarantined. Nonetheless, he is shown to be lenient enough to allow Yuma to Duel for Astral's sake.

Another trait is his adherence to Ranking Up, especially to when it comes to his world. In his definition, it's the means to surpass limitations and to escape the suffering brought on by Chaos. To that end, only a select chosen few are allowed entry to the Astral World as they have the potential to Rank-Up spiritually.

As the will of the Astral World itself, Eliphas is near omnipotent. He can appear anywhere he wishes and clone copies of himself. He can summon guard dogs and shoot lightning at those who happen to intrude into his domain, as shown while he was chasing Yuma.

As a denizen of the Astral World, he is also capable of performing multiple Shining Draws during a Duel.

Eliphas was created by the denizens of the Astral World as the ultimate symbol of their worldview of "Ranking-Up" at the time.[1]

Eliphas confronted Yuma Tsukumo when the latter arrived in the Astral World. Insisting that Yuma could not be allowed there, he attempted to kill him several times, with Yuma being saved by Rainbow Kuriboh. After meeting Enna and using the power of Chaos to cure several Astral denizens, Yuma and Eliphas conversed with one another, with Yuma demanding Astral's return. Eliphas explained that the Barian World is the result of the Astral World expelling Chaos in order to Rank-Up and that Astral's original purpose was to destroy the Barian World. Eliphas also blamed Yuma for Astral's injuries, but Yuma countered that he and Astral cooperated as friends. Yuma suggested they Duel to determine Astral's fate. Eliphas agreed, but Yuma was to wager his memories of Astral. The Duel begins with Eliphas Summoning "New Order 4: Etheric Anubis" on the first turn and revealing that he was capable of performing Shining Draw.[1]

Eliphas continuously Double Ranked-Up his monsters through "Rank-Up-Magic Astral Force", while lecturing Yuma on what he done to Astral. Believing that Astral had been "corrupted" by Yuma's Chaos and the betrayal at "Sargasso", Eliphas intended to purge Astral's memories and send him off to fulfill his original purpose once more. The betrayal at "Sargasso" inflicted a small wound that threatened to poison Astral's entire body. It was only through the intervention of Yuma's father Kazuma that Astral was sent to Yuma as Kazuma modified Astral's programming before sending him, in defiance of his original mission. By healing Enna and the others, Eliphas believed that Yuma had infected them with Chaos - and thus they could not be allowed to live. However, Eliphas agreed to reconsider his perspective if Yuma would win. Though Yuma brought out "Number C39: Utopia Ray Victory" and succeeded in inflicting a large amount of damage to Eliphas, Eliphas continued to Rank-Up his monsters, culminating in "New Order 12: Etheric Maahes".[2]

Through cards such as "Rank-Up Advantage" and "Rank Domination", Eliphas was able to perform multiple Shining Draws in a single turn and drastically cut down the ATK of Yuma's monsters, ultimately draining the ATK of "Utopia Ray Victory" to 0. Through the protection of "Rainbow Kuriboh", Yuma was able to survive with only 100 Life Points remaining. He attempted to bypass Eliphas' monsters and launch a direct attack using "Stealth Strike", but Eliphas countered with "Rank Wall". On his next turn, Eliphas performed one final Rank-Up, unveiling an unprecedented Rank 13 Xyz Monster - "New Order 13: Etheric Amon". Its effect drained Yuma's Deck, using it to gain more Overlay Units for itself. Once more, "Rainbow Kuriboh" allowed Yuma to survive another turn.

Through his will, Yuma was able to perform a Shining Draw of his own, creating "Rank-Down-Magic Numeron Fall" and Ranking-Down "Number 39: Utopia" into a Rank 1 monster - "Number 39: Utopia Roots". While Eliphas scoffed at its pitiful Rank and 500 ATK as well as Yuma conducting a summon that removed every card in his Deck, Yuma revealed its effect and used it, ultimately multiplying its ATK by the Rank difference between itself and "Amon" as well as multiplying it by the number of Overlay Units "Amon" had. Though Eliphas believed that Yuma's efforts were still wasted due to his monster having already attacked, Yuma followed up with "Double or Nothing!", which made the ATK of "Utopia Roots" reach 79,200, allowing "Utopia Roots" to obliterate "Amon" and defeat Eliphas.

A man of his word, Eliphas released Astral and entrusted the fate of the Astral World to him and Yuma. They were given permission to confront the Barian World in whatever approach they wished instead of destroying it along with information about Don Thousand's existence. He then bestowed Astral with a card and returned the Emperor's Key to Yuma before sending the ZEXAL wielders back to the Human World.[3]

Eliphas sacrifices himself to save Astral.

When Don Thousand opened a portal to the Astral World during his Duel against Nash and Yuma, Eliphas witnessed the damage caused to the Astral World. He later journeyed to the Barian World when Astral was intent on sacrificing himself to destroy "Numeron Network". Eliphas pushed Astral out of the way, telling him he cannot die yet. He threw Astral another card (later revealed to be "Rank-Up-Magic Astral Force"[4]) and forcefully returned him to the Duel's location as the Numeron Network went critical when the energy from it backfired, having nowhere else to go after the card was removed.[5]

After the final Duel between Yuma and Astral, Eliphas was revived by the power of the Numeron Code. He was seen discussing the new crisis that plagued the Astral World with Enna.[6]

Eliphas uses an "New Order/Etheric" Deck focused on Double Rank-Up monsters, which resemble Egyptian deities. He is the first character to Double Rank-Up monsters in Yu-Gi-Oh! ZEXAL. His "Rank-Up Advantage" also grants him extra draws for each successful Rank-Up, allowing him to potentially perform multiple Shining Draws each turn. He also employs several cards that grant him advantage by out-Ranking the opponent's Xyz Monster such as "Rank Domination" that ensures that his high-Rank Xyz Monsters are difficult to defeat in battle.