Ener-D (short for "Duel Energy"), spelled Enerdy in Yu-Gi-Oh! 5D's Tag Force 4 and Yu-Gi-Oh! 5D's World Championship 2010: Reverse of Arcadia and known as Moment (モーメント Mōmento) in the Japanese version, is a form of energy in Yu-Gi-Oh! 5D's. It is the ultimate energy generation system that keeps spinning in one direction to create an endless power supply. Ener-D is the source of power in New Domino City that keeps the city running while making the technology for Duel Runners, Turbo Duels, and Solid Vision possible.

In the dub, its name is a portmanteau of "energy" and the letter D (which stands for "Duel"). This name change may have been made due to the fact that, in physics, moment has a distinct definition unrelated to energy. 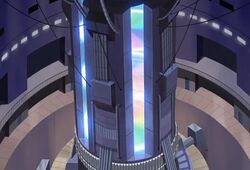 Kaiba Corporation's R.R.D. was in charge of this technology; the lead developers who had begun the research were Yusei Fudo's parents, following Dr. Fudo's discovery of the Planetary Particles which were essential to making Ener-D possible.

Roman described the Ener-D as a near-limitless source of energy that doesn't produce any contamination.

The Ener-D Reactor is implied to be a perpetual motion machine, and runs at full capacity in order to meet the power requirements of New Domino City. Everything in the city is powered by the Ener-D; if the Ener-D shuts down the entire city suffers a blackout. Its limit is in its ability to channel excess energy it produces. The appearance of the Crimson Dragon during the duels between Yusei Fudo and Jack Atlas caused the system to exceed its limits.

During their first match when the Crimson Dragon appeared, it overpowered the system by dramatically overflowing the energy generation to it. As it was incapable of handling so much power, the system completely shut down, leaving the city in a total blackout. The overflow problem occurred once again during the Fortune Cup, though according to Zigzix it was running at full operation. Apparently some modifications had to have been made to the system, since the 2nd appearance of the Crimson Dragon only caused the temperature and pressure within the Ener-D Reactor to reach critical point rather than cause the system to blackout as it had before.

According to Bruno, the Ener-D is self-aware and can read the emotions of humans, and should a human reach the Clear Mind state, they can control that Ener-D.

It is later revealed that Synchro Summoning causes the Ener-D to spin faster, speeding up the evolution of humanity in the process. However, if it spins too quickly, it will shift into reverse, creating an explosion like Zero Reverse at a massive scale.

In the apocalyptic future Z-one, Antinomy, Aporia, and Paradox came from, humanity had abused the power of Ener-D to control evolution and filled it with greedy desires and emotions to the point that the Ener-D went insane and created an army of Meklord Emperors to kill all of humanity, and later exploded completely; these two events completely destroyed the world and humanity itself. The only survivors attempted to stop this apocalyptic future by going the past and erasing Ener-D from existence.

In episode 149, it is revealed that the Meklord Emperor Genocide could be stopped by removing the negative emotions that caused the Ener-D to go out of control and build the Meklord Emperors in the first place, but unfortunately Z-one discovered this too late and couldn't stop the Ener-D before it exploded.

Thanks to Z-one's intervention, the present day New Domino City became aware of the situation, and Yusei created a program known as Fortune, which keeps the Ener-D under control, thus preventing the Meklord Emperor Genocide from occurring. 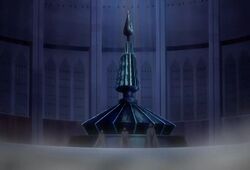 After the Fortune Cup, the existence of the Original Ener-D Reactor was revealed within Satellite's inner grounds. However, according to Rex Goodwin, as it was the first system, it was totally insecure and imperfect when it was activated seventeen years before by R.R.D.. Consequently, the system's activation resulted in the major catastrophic event known as the "Zero Reverse Effect". This was the reason behind the destruction and splitting of Domino City into New Domino City and Satellite. The system was abandoned in Satellite, until it was "found" by the Dark Signers. According to Goodwin, the Original Ener-D Reactor was being used as a door to the Underworld. 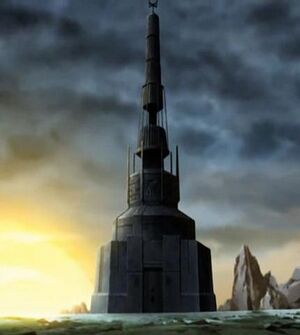 The system possessed four safety switches located in the B.A.D. area. These were a fail-safe placed long ago after the system was shut down completely. Each of the control units are code-named with the name of one of the Earthbound Immortals and is guarded by the Dark Signer who possess the corresponding Earthbound Immortal card. The main system itself is represented by the Spider mark and is guarded by the leader of the Dark Signers, Roman.

Before Roman and Yusei's second duel took place, the Dark Signers blew up the Original Ener-D Reactor. As the negative energy was released the two of them, standing above it, commence their rematch. Yusei won the duel but Roman blew up the bridge and Yusei fell into the reactor.

Only three of the four control units were activated, because Akiza Izinski's Duel with Misty Tredwell prevented her from activating the last tower in time.