Erazor, known as Semimaru in the Japanese version, is a character in the Yu-Gi-Oh! ZEXAL anime who is a Barian working for Mr. Heartland, summoned by Vector after Number 96's defeat. 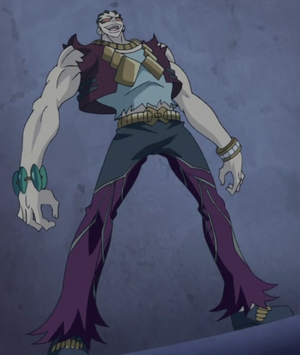 In his human form, Erazor has a gray skin tone. He wears a brown sleeveless jacket, a pair of dark glasses, a necklace and black pants. He seems bald, but has something that slightly resembles hair on the back of his head.

In his true form, Erazor is a tall bipedal, cicada-like humanoid with insect wings and a proboscis for a mouth. His skin is a hard brown exoskeleton with a red skull plate on his forehead.

Erazor is shown to be an extremely laid-back, person, taking pleasure in draining the memories of his victims rather than doing his duties. He has a habit of pushing his glasses up his nose as well as licking his lips (the latter not present in the dub).

He also tends to label his enemies, notably Yuma and Trey, as gaki (餓鬼, brat in Japanese).

As a Barian, Erazor has the unique ability to devour peoples' memories, leaving his victims in a comatose state. Like the other members of his gang, He may also spawn a crest in the form of Don Thousand's Emblem during a Duel to steal half his opponents' Life Points and add it to his own.

Erazor's dub name is a corruption of "eraser", referring to his ability of stealing his victims' memories. His Japanese name, Semimaru, is based off of "semi", the Japanese word for cicada, alluding to his Deck and his true form.

Erazor was a former underworld Dueling criminal who was associated with Mr. Heartland. He was eventually reincarnated as a Barian and later assigned to aid Mr. Heartland in retrieving the Numbers.[2] 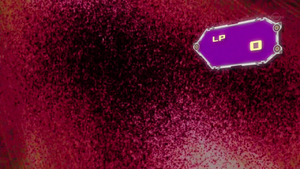 Erazor and the other members of the Fearsome Four of the Dark Dueling World were summoned to Earth by Don Thousand. Erazor began to attack other Duelists and steal their memories, including the Super Secret Number Card Investigation Club, while Mr. Heartland lured Yuma Tsukumo to their hideout. Heartland told Yuma that in exchange for the "Numbers", he would restore the memories of his friends while erasing those relating to Astral. Yuma refused, resulting in Heartland attacking him with a swarm of insects. After Trey saved Yuma from the attack, Erazor challenged both of them to a Duel. Before the Duel started, Heartland activated a device that halved Yuma's and Trey's Life Points, while doubling Erazor's at the same time.[2] Despite the large Life Point disadvantage, Yuma and Trey managed to defeat Erazor with a combination of "Number 6: Chronomaly Atlandis", "Reservation Reward" and "Double or Nothing!". After the Duel, he vanished, while his "Number" card was collected by Yuma and Trey.[3]