This monster's profile appears to be a recolored "Exodia Necross", flipped over horizontally. 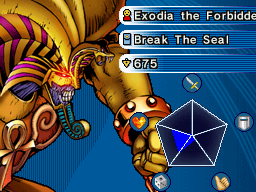 Exodia is a Level 2 Theme Duel opponent that challenges the player to defeat him using Exodia's effect.

Exodia is a Tag Duel opponent, partnered with Tragoedia, by winning a Duel with Exodia's effect. Their tag team name is The Exodia.