Fake Jack Atlas is a Duelbot disguised as a psychotic Jack Atlas in the Yu-Gi-Oh! 5D's anime, built for the purpose of ruining Jack's reputation and get him arrested to pave the way for the rest of Jakob, Lester and Primo's plan.

Fake Jack and his Duel Runner look similar in appearance to Jack and Phoenix Whirlwind. The only differences from the original are that he (both his clothes and physical appearance) and his Duel Runner have a darker color scheme than that of the real Jack and his Phoenix Whirlwind and that his eyes are red instead of violet. In addition, the Fake features a small, jagged red tattoo underlining each eye.

Besides his physical differences, the fake Jack also features subtle alterations to his voice in each adaptation. In the Japanese version, the Fake's voice has a robotic echo added. The dub has Fake Jack's voice slightly more high-pitched than the original, making him appear to snarl in almost of all of his sentences.

Fake Jack behaves much like Jack was before becoming friends with Yusei again, such as being obsessed as the King of Duelists and claiming the "King's Dueling must be for entertainment". He also performs the same Synchro chant as Jack for "Red Dragon Archfiend".[1]

Jack was arrested by Sector Security, suspected for a streak of destruction in New Domino, running Duel Runners off the road and injuring their riders. It is later revealed that it was the work of an impostor and Jack rushes to find them. When he locates the impostor, "Enemy" Jack tries to run him off the road, before challenging him to a Turbo Duel. As the Duel is about to commence, an Infinity symbol appears, with Jack wondering what is causing the light surrounding them.

During the Duel, the impostor constantly taunted Jack, by repetitively referring to himself as "King", much to Jack's shock and disgust. When Jack draws "Trust Guardian", he chooses to use "Dread Dragon" instead because he believed "Trust Guardian" won't fit his style of Dueling. This however allows the impostor to defeat Jack easily and run Jack off the highway and into the sea, using the real damage caused by "Red Dragon Archfiend".

Yusei and Crow arrive on the scene and the impostor distracts them with "Red Dragon Archfiend" to escape. Yusei and Crow believe Jack has gone mad. The impostor was later pursued by Kaz, Yusei and Crow and rammed their Duel Runners while taunting at them just before the real Jack Atlas reappears for a rematch.

This time, Jack decides to use "Trust Guardian" for this Duel, knowing that his pride was what caused him to lose in their previous Duel. This allows the real Jack to turn the beginning of the Duel in his favor, as he is able to not only destroy the robot's copy of "Red Dragon Archfiend", but also inflict major damage to its Life Points. However, the impostor makes a comeback in trying to winning the Duel by Summoning two more copies of "Red Dragon Archfiend" and reviving the copy that Jack destroyed.

Both copies, along with the third one he had Special Summoned from the Graveyard, are able to decrease Jack's Life Points dramatically. The impostor tells Jack that he won't be able to win, given that he isn't the same man as he was before. 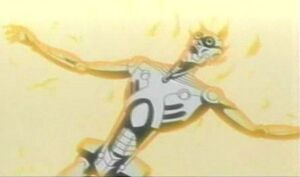 Fake Jack Atlas is revealed to be a Duelbot upon defeat. (This scene is cut from the dub.)

However, Jack disproves this with the power of his friends and the Crimson Dragon. He Summons "Majestic Red Dragon" and uses it to win the Duel. At the end, the overwhelming attack destroys the robot and its Deck completely (in the dub only his helmet, Deck and Duel Runner are shown being destroyed and the robot is seemingly vaporized by the explosion). Despite the robot's destruction and the loss of the copied cards, the Nobles don't consider it a total loss as Jack's power gives them another piece of the Circuit.

He was later seen in a flashback after Team 5D's defeated Team Unicorn and had a party where the group remembered the times that they Dueled strange opponents who inflicted real damage.

Fake Jack uses a Jack Atlas Deck, primarily focused on Synchro Summoning 3 "Red Dragon Archfiends", of which all were different colors than the original; purple, yellow, and green. He also utilizes a large amount of Trap Cards to support it such as "Lineage of Destruction" and "Crimson Fire". This Deck was constructed by Lester as "Red Dragon Archfiend" is a unique card, therefore no other authentic copies of it existed.