Falsification of history is an ability which can be accessed via the machine, Infinity, which allows the user to change the course of history by going to the past and changing things (as seen with Primo, who came out of a portal stating that removing Clark was already done and that he should vanish now).[1]

The Three Pure Nobles are able to harness this power.[1] 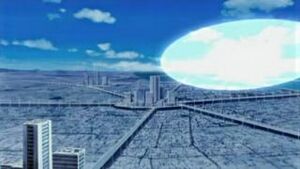 The shockwave above New Domino City.

When history is about to be falsified, a shockwave is emitted from the sky. Wherever the shockwave passes becomes affected. Changes are made instantly and people's recollection of the previous timeline is erased.[1]

Some people are unaffected. Although they go to the altered timeline, they still have memories of the previous one. The nobles, being the ones who cast the falsification, are unaffected, the Crimson Dragon protects the Signers and people near them by emitting a protective bubble from their Marks of the Dragon, and the members of Team Ragnarok are protected by the Aesirs, whose card forms they possess.[1]

The same issue of Monthly Duel before and after a falsification of history.

The first time this ability was seen in the series, though it was unknown how at the time, was after the duel between Lester, Leo and Luna.[2] The changes that were made included:

After Jack Atlas defeated the Fake Jack Atlas, the seacave where he was captured in disappeared. After Yusei, Sherry and Bruno gained knowledge of Yliaster through Momentum Express, the emperors decided that it was necessary to make some changes.[1] These included:

People who are immune to history changes due to:

Existing out of time:

Bear the Mark of the Dragon or are in range for the barrier to protect them: