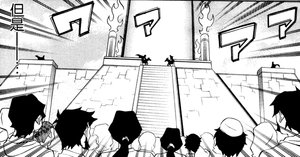 A Ritual Duel being conducted 5000 years ago.

The Festival of Duality (陰陽祭 Onmyō-sai) is a religious Ritual Duel which was conducted in ancient times in the Yu-Gi-Oh! 5D's manga.

The Ritual Duel used to be conducted between a Duel Priest and a Duel Priestess inside the Aerial Fortress Seibal, and it involves the ressurection of the Ultimate God. It used to be held annually 5000 years prior to the manga's present, with the Duel Priestess' win being a tradition. However, after Akiza's predecessor lost following Rex Goodwin's wish, a disaster occurred, and the ritual was never conducted again, until Rex and Roman conducted it once more in modern times.[1] It was said that the enshrined deity of the ritual would grant any single wish they desire once they reach the end of the ritual, with Rex and Roman becoming Duel Priests in order to win the ritual and wish for Ish, who had been offered as a sacrifice for the ritual, to return.[2]

The Ritual is begun with the Turbo Duel between a Duel Priest and Priestess towards Seibal, whose winner is declared the King of Earth's Lock (Supreme King of the Earthbound Lock in the Japanese version).[1] Then, inside the Fortress, two more Duels occur between Duel Priests: one in the Corridor of the Northern Sky and one in the Corridor of the Southern Sky. The winners of these Duels Duel against each other, and the final winner becomes the King of Sky's Lock (Supreme King of the Heavenly Lock in the Japanese version).[3] Both Kings than Duel each other in a final Turbo Duel toward the Ultimate God's tower. Meanwhile, the defeated Duel Priestess is offered to the Ultimate God as a sacrifice.[4] The outcome of the Duel decides whether the Ultimate God will be resurrected or sealed again, and the final winner becomes the "King Who Unlocks" (Supreme King of the Unlocking in the Japanese version).[5] Once the ritual is done, a voice, presumably the voice of the enshrined deity of the ritual, talks to the winner, asking them which wish they want granted.[6]