Field Spell Cards (Japanese: フィールドカード Fīrudo Mahō Kādo) are a subcategory of Spell Cards that is placed in the Field Zone, and remains face-up on the field after activation.

Field Spells are available in Yu-Gi-Oh! Rush Duel. Prior to the introduction of Equip Spell Cards in Deck Mod Pack: Fortissimo of the Whirlwinds!!, they were the only subcategory of Spell Cards available in Rush Duel other than Normal Spell Cards.

Field Spells may affect both players or only their controller.

Placed in the Field Zone[edit]

Like other Spell/Trap Cards that remain face-up on the field after activation, a Field Spell Card must remain face-up on-field to resolve its activated on-field effect, unless said effect specifically moves the card to an off-field location as a cost.

If a Field Spell Card is removed from the field after effect activation but before resolution, the activated effect will resolve without effect. 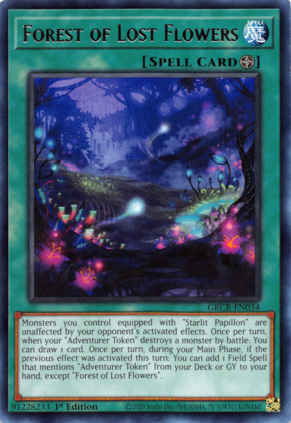 "Forest of Lost Flowers", a Field Spell Card in the TCG/OCG