FIRE ( Honō "Flame") is an Attribute commonly associated with Pyro, Dragon, Dinosaur and Machine-Type monsters, though it is not uncommon in other Types such as Warrior or even Beast. FIRE is diametrically opposed to WATER, but there is no direct advantage outside some of the video games (however this idea also appears in the effects of some cards like "Frost and Flame Dragon", "Elemental HERO Inferno", "Star Boy" or "Little Chimera").

FIRE monsters tend to focus on inflicting Effect damage to the opponent, a mechanic traditionally known as "Burning". In recent years, a trend among FIRE monsters is that many of them have 200 DEF.

Recent FIRE Archetypes are also fast and combo-oriented, and while they are slow at the start, they tend to build-up for huge plays that often result in One Turn Kills. They also tend to use some Anti-Meta strategies, like Graveyard manipulation, banishing and negating effects.

FIRE Monsters are used by Axel Brodie in Yu-Gi-Oh! GX, Alito in Yu-Gi-Oh! ZEXAL and Theodore Hamilton in Yu-Gi-Oh! VRAINS, making it the least represented Attribute (with the exception of DIVINE) in the anime.

Though FIRE monsters can be extremely powerful, they tend to lack support for one another. Instead of focusing on combining and drawing on their strengths as a whole, coupled with the fact that there are few good Spell and Trap Cards to suit them than some of the other Attributes, FIRE monsters can be seen as having a negative impact on the opponent. 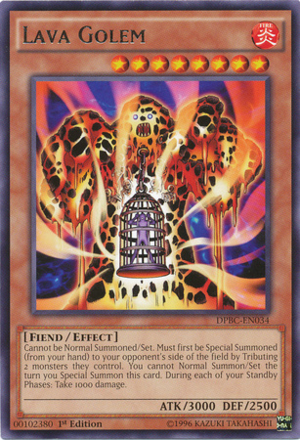