From Yugipedia
Jump to: navigation, search
For other versions of this character, see Fonda Fontaine (disambiguation).

Fonda Fontaine, known in Japan as Emi Ayukawa, is the head of the female Obelisk Blue dormitory at Duel Academy. In addition, she is the gym instructor as well as the school's head nurse. 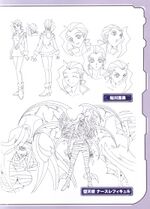 Linework of Fonda and "Nurse Reficule the Fallen One".

Fonda wears a variation of the standard Obelisk Blue girls' uniform, consisting of a white jacket with blue trim, a pink skirt and brown heeled boots. She has grey eyes and red hair, with one bunch sticking out over the right side of her head. She wears a pair of earrings and a soft shade of lipstick. Fonda has a reputation for her beauty among the students of Duel Academy, such that many of he boys have faked injuries just to meet her.

Fonda mostly appears while taking care of teachers and students whenever they are injured, and does not play a large role until the third year.

When Duel Academy was transported into the desert, Fonda is transformed into one of Marcel's Duel Ghouls upon trying to protect the sick and injured Blair Flannigan from the onslaught of zombified students trying to get into the infirmary. She Dueled against Jaden Yuki and ultimately lost, though she and the accompanying Duel Ghouls quickly recovered afterwards, due to Duel Ghouls being tireless. She and the other zombified students and staff were turned back to normal after Duel Academy is returned to its proper place from an alternate dimension.

When Zane Truesdale washes up on the beach of Duel Academy, Fonda cared for him in the infirmary. Fonda and the rest of world was pulled into the World of Darkness, and she was later revived along with everyone else when Jaden defeats Nightshroud.

Fonda plays an "Anti-Cure" Deck which focuses on the reversal of Life Points-recovery into effect damage through the ability of "Nurse Reficule the Fallen One". She uses cards such as "Dark Cure" and "Burning Algae" to forcefully increase her opponents' Life Points for this purpose, while protecting her main monster from being destroyed easily in battle with "Brutal Potion".

Her combination of "Nurse Reficule the Fallen One", "Dark Cure" and "Brutal Potion" were released in the OCG/TCG as promotional cards with Yu-Gi-Oh! GX Tag Force Evolution.