"Forbidden One", known as "Sealed" (されし Fūinsareshi) in Japanese, is an archetype of five cards, each representing a body part of "Exodia the Forbidden One", which when gathered in the player's hand, grant the player an automatic win.

Each "Forbidden One" card is a DARK Spellcaster. They first appeared in Yu-Gi-Oh! Duel 03636: "Battle Beyond Hope" and received their first support as a Weekly Shōnen Jump promotional card in 2007. "Forbidden One" was one of the first Deck themes, and it still remains a popular one.

The main card, "Exodia the Forbidden One", is one of the first five Effect Monsters ever to be released and the first card to have an alternative victory condition.

The "Forbidden One" cards are some of the most iconic cards in the franchise, being well known for their automatic win condition and Yugi's use of them in the first episode of the anime. 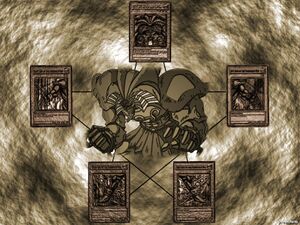 "Exodia" was, at first, a beast of such incalculable and intimidating might that he was split up into five distinctive parts, each one of them chained and sealed away by magic from all the other monsters (hence "the Forbidden One"). This way, his power was prevented from ever being used again.

As a result, in the Yu-Gi-Oh Card Game, there are five distinct "Forbidden One" cards, each one symbolizing a part of the complete "Exodia". In order for "Exodia" to be Summoned, the player must gather all the five parts into their hand. This brings the parts of the "Forbidden One" together, allowing "Exodia" to come forth, his strength being so great that he guarantees the player an automatic win, regardless of the situation.

The effect of "Exodia" makes it one of the most unusual monsters in Duel Monsters; its effect doesn't rely on ATK and DEF or even being on the field at all in order to activate, instead causing an immediate victory when all five cards are assembled in the hand.

In the anime, Shimon used Exodia against Zorc Necrophades, against whom he was equal; however, "Exodia" was defeated because he drew his power from Shimon, a single mortal man, whereas Zorc had his own power source. 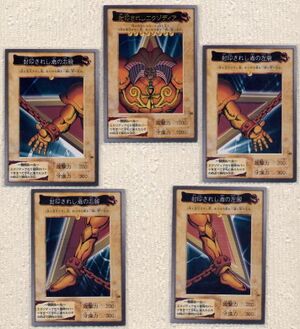 Complete Bandai version of "Exodia the Forbidden One"

Exodia's backstory and pharaoh-like appearance seemed to be a reference to the famous Egyptian legend of Osiris. Osiris was the god Egyptians believed brought them civilization, such as the knowledge of architecture, farming, and establishing the line of pharaohs. However, Osiris was betrayed by his jealous brother Set and was cut into several pieces, which were then scattered across Egypt. Osiris' wife Isis recovered the pieces and brought Osiris back to life long enough for them to bear a son, Horus, before Osiris departed to the Land of the Dead where he became its ruler.

While the primary purpose of "Exodia" is to declare an automatic win through having all five pieces, there have been other methods to using it. The first of these was "Exodia Necross", which had to be summoned via "Contract with Exodia" and possesses the near-invulnerability of the anime version of "Exodia" as long as the actual "Forbidden One" pieces remain in the Graveyard. It gains 500 ATK during each of the player's Standby Phases and cannot be destroyed in battle or by Spell and Trap effects. It is automatically destroyed if any of the five "Forbidden One" pieces do not exist in the Graveyard. Due to its near-invincibility and increasing strength, it serves as either a trump card that cannot be defeated or as a backup plan if too many "Forbidden One" pieces end up in the Graveyard.

The next such incarnation was "Exodius the Ultimate Forbidden Lord", which provided an alternate method of winning with "Exodia". "Exodius" can only be Summoned by returning all monsters in the Graveyard to the Deck. When "Exodius" attacks, a monster must be sent from either the hand or Deck to the Graveyard. "Exodius" gains 1000 ATK for each Normal Monster in the Graveyard. Should all five pieces of "Exodia" exist in the Graveyard as a result of being sent there via the effect of "Exodius", the player automatically wins the duel. Since the "Forbidden One" limbs are Normal Monsters, they power up "Exodius" when sent to the Graveyard by its effect, allowing field presence to be maintained, while also contributing to the possibility of an automatic win. Since its Summoning condition puts monsters from the Graveyard back into the Deck, it allows the possibility of an automatic win even if "Forbidden One" pieces are sent to the Graveyard, and in fact makes it beneficial to send them there again.

In addition, there is "Exxod, Master of The Guard" which greatly resembles "Exodia", though without an automatic win effect. In the same vein as "Necross" being the Zombie counterpart of "Exodia", "Exxod" resembles a completed, though still sealed, "Exodia".

Finally, "True Exodia" provides an alternate win condition for its controller's opponent, as long as the only monsters on the field are itself and 1 each of the 4 "Forbidden One" Normal Monsters.

In the second anime series, the "Forbidden One" cards were notable for never successfully played until Yugi Muto was able to assemble all five pieces during his duel against Seto Kaiba during episode 1. "Exodia" appeared in that duel when Yugi gathered all five pieces in his hand, after which it launched an attack, that was prompted by the line "Exodia, Obliterate" ("Hellfire's Rage, Exodo Flame!" in the original) from Yugi. The attack wiped out all three of Kaiba's "Blue-Eyes White Dragons" and Yugi won the Duel.

However, Yugi never used the "Exodia" cards again in the series because Weevil Underwood threw them overboard during the boat trip to Duelist Kingdom to ensure that Yugi couldn't use them for the tournament; despite the best efforts of Joey Wheeler, only two pieces were recovered. 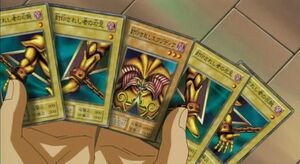 Weevil Underwood holding all 5 pieces of Exodia, as given to him by Yugi during episode 3.

In the Virtual World Arc, Gozaburo Kaiba used an Exodia Deck against Seto Kaiba, and believed that since Yugi had defeated Kaiba with "Exodia", Kaiba would fear it. Instead of collecting the various "Forbidden One" monsters in his hand, Gozaburo sent them to his Graveyard so he could Summon "Exodia Necross". However, Kaiba was able to overcome his fears and saw the weakness in "Exodia Necross", and so removed the "Forbidden One" monsters in the Graveyard from play using "Soul Demolition", and thus rendered "Exodia Necross" powerless.

Exodia made one final appearance during the Dawn of the Duel Arc, in episode 216, as the Ka spirit of Shimon Muran. Shimon had sealed "Exodia" a long time ago away due to its godly strength but released him to engage in battle with Zorc Necrophades. Despite a strong effort, "Exodia" was defeated by Zorc, because "Exodia" drew his power from Shimon, while Zorc used the power of the darkness. Initially, though, both of them seemed imperishable, but as The Forbidden One's life force was drawn from a single human, any damage caused to "Exodia" was also caused to Shimon himself, and Shimon, a sole mortal, wasn't able to stand up to the power of Zorc, which thus allowed the Dark Demon to easily cleave "Exodia" in half, and killed Shimon in the process.

In Yu-Gi-Oh! GX, "Exodia" was used by two separate duelists. The Yubel-possessed Marcel Bonaparte used an Exodia Deck, which he discarded after he obtained the three Sacred Beasts. He gave the five "Forbidden One" cards to Adrian Gecko as part of a deal.

Later in the season, Adrian discovered the seal of "Exodia" in the third alternate dimension and realized that he must sacrifice the Duel Energy of someone close to him in order to free "Exodia". Adrian decided to sacrifice Echo, whom he loved, but was opposed by Aster Phoenix. The two Dueled and Aster was able to block Adrian from achieving the victory condition of "Exodia" using "Force of Four." However, Adrian was able to make a comeback with "Exodius the Ultimate Forbidden Lord". Echo willingly sacrificed herself to release "Exodia", and despite Aster coming close to victory, Adrian was able to Summon "Exodia" by using the victory condition of "Exodius".

Adrian used his Exodia Deck against the Yubel-possessed Jesse Anderson in order to become King of the third alternate dimension. Adrian was defeated when his opponent Summoned "Yubel", whose effect defeated him as she attacked "Grinder Golem". Had that not happened, Adrian would have won, as he had four different "Forbidden One" monsters in his hand and was about to draw the fifth, which was placed on top of his Deck by using "A Feather of the Phoenix".

In Yu-Gi-Oh! Capsule Monster Coliseum, the player could fuse the five pieces of "Exodia" to Summon "The Legendary Exodia Incarnate", the complete Exodia, (but it will be only like a normal fusion piece) with an ability to cause massive damage on the monsters that was in range, that was known by "Obliterate".

Yu-Gi-Oh! The Duelists of the Roses[edit]

In Yu-Gi-Oh! The Duelists of the Roses, "Summoned Lord Exodia" could be unlocked in the Library when the player successfully Summoned Exodia, but it was impossible to see him in 3D, and the only available statuses were his Type, which is Spellcaster, and his Attribute, which is DARK.