Formula Synchron is a character version of the card "Formula Synchron". It appears in the video game Yu-Gi-Oh! 5D's World Championship 2011: Over the Nexus as an unlockable opponent.

Formula Synchron can be unlocked as a Single Duel opponent, faced in Turbo Duels, by using Speed Spells 100 times.

It can also be unlocked as a Tag Duel opponent for Ground Duels, partnered with Shooting Star Dragon as the Stardust Battle Tag Team, by Turbo Dueling 50 times. 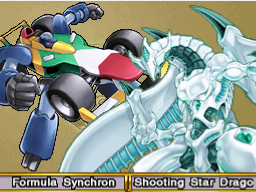