Four Aces is a card game Ryuji Otogi played with Katsuya Jonouchi for a bet.

Ryuji tricks the player to think this is a fair game, with a 50-50% chances. However, this is a bar bet. It works like this:

At first, Ryuji thought Yugi has set him in another bar bet, but then he realizes this is a fair game. Any other result would end up being a "draw", so the player who picks the joker first loses. The chance of picking the joker is always 1/5, and since both Yugi and Ryuji pick the same number of cards, the game was fair. 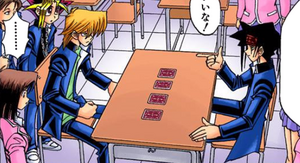 Ryuji plays as the challenger, and shuffles the aces face-down. Jonouchi picks the two aces in the middle; they turn out to be the ace of hearts and the ace of clubs, so Ryuji wins.

They play again, with Ryuji shuffling the aces face-down one more time. Jonouchi picks the left-most ace and the 3rd ace from left to right. They turn out to be an ace of clubs and an ace of diamonds, so Ryuji wins again. 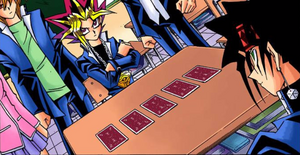 They play once more, with Ryuji starting this time. Yugi picks the aces of clubs and spades, while Ryuji picks the ace of diamonds and the joker, so Yugi wins again.