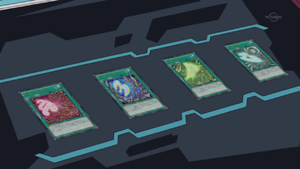 The bracelets are originally cards created by Leo to stop Z-ARC. Leo went across the Original Dimension, searching for natural energy data to create the cards, traveling to different environments such as a volcano, a blizzard mountain, and a desert with scanning equipment.

He was later able to create the Four Nature Cards from natural energy including flowers, birds, wind, and the moon. However, these four cards were stolen from Leo by Ray who later confronted Z-ARC. During her Duel with Z-ARC, the four bracelets appeared on Ray's right arm. These bracelets helped her stop the Supreme King Dragon Z-ARC, and split him, along with herself and the Original Dimension, resulting in the formation of the Four Dimensions and being reincarnated as the dimensional counterparts.[1]

The Bracelets were returned to their original card forms when all of Ray's counterparts were absorbed into Arc-V. Leo took the cards planning to defeat Z-ARC himself but the cards were quickly sent to the graveyard before he could do anything with them.[2] Ray, via controlling Riley's body, was able to use the cards once again which caused the Bracelets to once again form on Riley's wrist.[3] However, they disappeared following the Standard Dimension's rebirth into the "Pendulum Dimension" and Riley's regression into an infant.[4]

These items are four, metallic, jeweled bracelets, initially seen as innocuous and simple items, but shown to have interesting abilities. In the case of Zuzu's bracelet, if any of Yuya Sakaki's three dimensional counterparts approach Zuzu while she is in the presence of either another one of them or Yuya himself, the Dimension Bracelet will warp one of them, their personal belongings, and anyone or anything they happen to be touching away, including Zuzu herself. Both her and Celina's bracelet begin to blink in warning when something abnormal happen's to Yuya and his counterparts.[5] Rin and Lulu's bracelets abilities, however, remain largely unknown. All bracelets are implied to be keystones that held the power of preventing their respective dimensions from fusing back into the original dimension, as shown when the four dimensions begin fusing when they were absorbed into the Arc-V machine along with their wearers.[6]

The design of each Dimension Bracelet, as well as the visual theme of their wielder's Decks, represent "the traditional themes of natural beauty in Japanese aesthetics" (, Kachō Fūgetsu).[1]

In their original card forms, they are Continuous Spell Cards of Ultra Rare variety each with a picture of Greek Symbol (π,∋,⊓,Σ) with background corresponding to their dimensional counterpart owners. The cards' names are En Flowers, En Birds, En Winds, and En Moon.

According to Yusho, the Bracelets' abilities are the result of Ray's will to keep Z-ARC from reviving. Each of Ray's reincarnations appears close to Z-ARC's reincarnations in order to keep them from meeting each other and merging into Z-ARC.[7]