The Four Dimensional Dragons, known as the Four Dimension Dragons[1] ( Fō Dimenshon Doragon) in the Japanese version and referred to as the Ultimate Dragons (の Chōten no Ryū),[2] Four Heavenly Dragons (の Shiten no Ryū), and Four Legendary Dragons[3] in the anime, are a series of Dragon monsters central to the plot of Yu-Gi-Oh! ARC-V. They are used by Yuya Sakaki, Yuto, Yugo, Yuri, and Z-ARC.

According to Leo Akaba, "Starving Venom Fusion Dragon", "Clear Wing Synchro Dragon", and "Dark Rebellion Xyz Dragon" are the strongest Dragons of their respective Summon mechanics. This led Z-ARC to incorporate them into his Deck (in addition to the "Odd-Eyes Dragon" he already owned) in order to satisfy his audience's selfish desire for more brutal and exciting Duels, eventually driving him mad to the point of merging himself with all of them, creating "Supreme King Z-ARC". 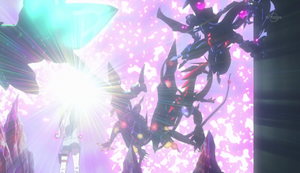 The four dragons are separated across the four dimensions.

Z-ARC was the original owner of these four dragons during his life in the Original Dimension, and he used them in a violent manner to entertain the audience.

According to Ray Akaba, the four dragons were angry at mankind for forcing them to fight brutally for their entertainment. When the ARC System gave them physical bodies, they became self-aware and their anger was intensified by Z-ARC's desire for power, resulting in them attacking at least the city. One day, the dragons and their master fused together through "Astrograph Magician" to form "Supreme King Z-ARC", which continued to lay waste until Ray used the Four Nature Cards created by her father Leo to split it, herself, and the entire dimension. The dragons were sent to each of the Four Dimensions, where they became owned by each of Z-ARC's reincarnations.

"Odd-Eyes Dragon" was transformed into "Odd-Eyes Pendulum Dragon" when Pendulum Summoning (a power born from the clash between Z-ARC and Ray, but wholly appropriated by the former as secret weapon for when they would inevitably fight again) surfaced in the Standard Dimension. Ever since then, the four dragons have been searching for each other in an attempt to become one again; eventually succeeding as their owners defeated and absorbed one another, and resulting in Z-ARC's revival. Once again threating humanity, Leo scrambled to use the ARC-V Reactor he had been building to unite again the dimensions as well as reviving the Nature Cards and Ray, feeding it with Ray's own reincarnations; but due to doing so in excessive haste, the machine failed: the dimensions were only partially linked by unstable distortions, and Ray's soul was revived without a body - trapped within the device itself. In desperation, Leo took the cards and rushed to use them against Z-ARC himself, but he was instantly defeated just before he could activate them. At this point Riley, a child adopted by Leo's family, offered his body to Ray so that she could reach the battlefield and wield the Nature Cards herself once more. She succedeed, but to avoid history repeating, Riley pushed out Ray's soul and replaced it with Z-ARC's a moment before the dimensions were pulled apart.

Following this new defeat, all four dragons were left into Yuya's possession, who was reluctant to use them besides "Odd-Eyes" out of fear that he might be overpowered by them again and reawaken Z-ARC's soul, sealed within a Riley regressed to newborn. When Yuya finally resolved to Summon all of them at once after being urged by Jack Atlas, he began hearing their minds, but instead of feeling any anger he learned that they were afraid of Ray and wanted to stop her resurrection, which kept her again confined inside the ARC-V Reactor. Yuya assured them that they shouldn't be afraid and were strong on their own without needing Z-ARC nor their "Supreme King" power. In response, the four dragons began to actively support Yuya during his current Duel, e.g. by helping him grab Action Cards.

During Yuya's subsequent third Duel against Declan, he realized that the dragons genuinely wanted to make people and other monsters smile just like Z-ARC, and only became violent because the audience back then became malicious and demanded bloodshed, and could feel their regret over it. Yuya was ultimately able to help the dragons accomplish this when Declan let out a laugh over being defeated, which in turn seemed to fully placate their anger and make Z-ARC's soul within Riley smile, as well as finally allowing the reincarnations of Ray to be freed from the reactor (which then began to unify the dimensions for good) and given back Zuzu's body.

The Dimensional Dragons resonate when in close proximity of each other, whether they have been Summoned in Duel or not. Additionally, they can influence their owners to Summon them if the conditions for doing so are met or can be met. When facing off against each other, or one is Summoned or about to be Summoned while in the presence of another, their owners suffer an intense burning pain in their chest. In the case of the former, it may cause them to enter an 'awakened' state, Dueling ferociously until their opponent is defeated, although they are capable of returning to their senses during the Duel. The dragons also appear to be able to cause their owner to synchronize with a counterpart if they happen to be in the same dimension.

The Dimensional Dragons are capable of traveling through dimensions in order to search for one another; Yugo stated that he was guided to both the Xyz Dimension's Heartland City and the Standard Dimension's Paradise City by "Clear Wing"; while Yuri complained about "Starving Venom" taking him to New Domino City.

When one of them is defeated by another, the losing owner is absorbed into one of their dimensional counterparts. In Yuto's case, despite having lost to Yugo, he was absorbed by Yuya who was closer to his position. However ownership of the Dimensional Dragons seems to be determined by the dragons themselves, as Yuto actively handed "Dark Rebellion" to Yuya saying the dragon conveyed its will for him to do so. 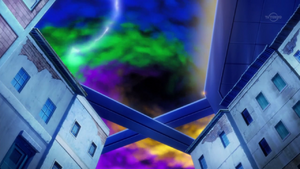 A distortion created because of the Four Dimensional Dragons' presence.

When all four Dimensional Dragons have been Summoned in the same location, a distortion in the sky appears and the dragons' owners all awaken. In addition, the dragons that are controlled by Yuya himself emitted an aura of darkness similar to the one he emits while awakened.

Each of the Dimensional Dragons' names uses the following structure: "[Trait] + [Summoning mechanic] + Dragon". Like most main protagonists' signature cards they each have 2500 ATK (except "Starving Venom") and 2000 DEF; also their Attribute is DARK (except "Clear Wing"). In the anime, all of them share a common trait of their effects only affecting Level 5 or higher monsters and, with the exception of "Odd-Eyes Pendulum Dragon", are related to changing ATKs. Their attack and effect names in Japanese also follow similar patterns: the effect names are two English words, while their attack names follow the same pattern as some past "-Eyes Dragon": "[Japanese word] no [Two English words]."

Over the course of the anime and manga and in the TCG/OCG, the Four Dimensional Dragons received several variant forms, like upgrades, downgrades, counterparts, corruptions, and mergers.

Like many signature cards' upgraded forms, the Four Dimensional Dragons' evolutions have 500 more ATK/DEF than their base forms (excluding "Odd-Eyes Pendulum Dragon"'s ones, which have no DEF change).

These are upgraded forms of the Four Dimensional Dragons whose name is a reference to the Yu-Gi-Oh! ARC-V anime.

These are variants of the Dimensional Dragons that belong to the signature archetypes their respective owners used in the Yu-Gi-Oh! ARC-V anime and manga.

These are "Magician" downgraded versions of the Four Dimensional Dragons and "Supreme King Z-ARC", and are commonly referred to as Z-ARC Magicians since they can be used more easily than their Dimensional Dragon counterparts to Special Summon "Z-ARC" with "Astrograph Sorcerer". With the exception of "Performapal Celestial Magician", these monsters are named after the color scheme of their respective Dragon.

These are upgrades of "Odd-Eyes Dragon", instead of "Odd-Eyes Pendulum Dragon", as indicated by their lack of horns, "wings" and "Pendulum orbs". Even though "Odd-Eyes Wizard Dragon" is visually based on "Pendulum Dragon", its Summoning effect is identical to "Odd-Eyes Saber Dragon's" one, making it fall into this category. Each of these cards is based on a different Attribute and Summoning mechanic, with its name and color scheme reflecting that Attribute, as well as opposite Attributes having "opposite" Summoning methods (for example, EARTH-Ritual and WIND-Fusion).

In the Yu-Gi-Oh! ARC-V manga, Yuya Sakaki, Yuto, Yugo and Yuri all used ace monsters that are counterparts of the Four Dimensional Dragons. Yuto still used "Dark Rebellion XYZ Dragon", like his anime counterpart, although he later evolved it into his true ace monster "Dark Anthelion Dragon".

There are also two other "Odd-Eyes" monsters that Yuya used in the manga: "Odd-Eyes Mirage Dragon" and "Odd-Eyes Persona Dragon".