Franz (フランツ Furantsu) is an employee of Industrial Illusions who works for Maximillion Pegasus and a minor antagonist in Yu-Gi-Oh! GX. During the Genex Tournament, Franz stole a copy of "The Winged Dragon of Ra" and entered the tournament. In the dub, he speaks in a German accent.

Franz is known to be an ambitious card designer who focuses on cards that have raw power. He is also known to get jealous and desires recognition, which led him to steal "Ra" in the first place.

During his Duel, Franz showed signs of megalomania and a superiority complex. Franz disrespected "Ra", calling himself the Egyptian God Card instead and sacrificing it to save himself, not caring about the card. 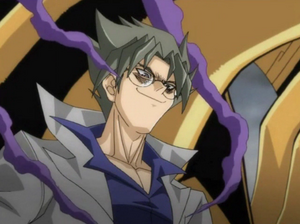 Franz's appearance after fusing with "Ra".

Franz was able to create the only card capable of binding an Egyptian God against its will, "Mound of the Bound Creator". In addition, he is one of the very few Duelists shown to be able to fuse with their monsters, mimicking Yami Marik during Battle City.

Franz was hired by Pegasus to be a card designer ten years before the the Genex Tournament. Franz was one of Pegasus' top card designers who was envious of Chumley Huffington's talents, seeing as his own designs are looked down upon because, as Pegasus declares, the cards Franz designed focused too much on power.

Out of frustration and anger, he decides to steal the only copy of "The Winged Dragon of Ra" that Industrial Illusions had kept for testing purposes.[1]

After doing so, he snuck his way into the Genex Tournament and manages to use "Ra" to defeat and critically injure two tournament Duelists. Later on, Pegasus and Jaden Yuki encounter Franz, who challenges the former to a Duel but it is the latter who ultimately accepts.

Ultimately, Franz is defeated by Jaden, who uses "Necro Illusion" to use "Ra" against him, despite neither having the knowledge of Egyptian hieratic text nor "Mound of the Bound Creator" in play. In the end, Pegasus consoles Franz's defeat and Franz agrees to return "The Winged Dragon of Ra" and return to Industrial Illusions as a loyal employee.[1]

Franz runs a Winged Dragon of Ra Deck, which, like Yami Marik from the Battle City arc in the previous series, focuses on Summoning "Ra" and using its effects. However, the "Winged Dragon of Ra" card that he uses is a copy that Industrial Illusions re-created for research, as its prototype, which Pegasus stated contained the spirit of Ra itself, was destroyed at the end of the previous series.