Frederick, known as Futoshi Harada ( フトシ Harada Futoshi) in the Japanese version, is a character in the Yu-Gi-Oh! ARC-V anime. He is a student of You Show Duel School. He functions as one of his friends' main supporters. 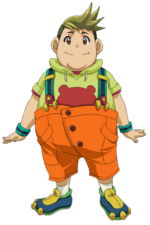 Frederick is an overweight youth with orange eyes and mousy brown spikes of hair that has darker sides. He wears a short-sleeved yellow hoodie with a red bear's head patterned on the stomach over a red shirt, large orange cargo shorts held up with aquamarine and black suspenders, wristbands in the same color scheme, and white socks with shoes in a similar style to his wristbands and suspenders with yellow tongues and grip pads for use in Action Duels.

In the English dub, Frederick speaks in a soft German accent. He has a tendency to speak German words on occasions and to mention Germanic food. In the German dub, he speaks in a Bavarian accent.

He is famous for getting the "shivers" when his friend turns the tables of the Duel (in the dub, this catchphrase is a little more flexible, but he commonly uses the term "goosepickles").

Frederick and Allie arrived at You Show Duel School to help out with the flood of applicants which was caused by Yuya's Pendulum Summon against The Sledgehammer and were impressed by the number of students wanting to join their Duel School. He was also excited to see the Pendulum Summon again but was surprised when Yuya couldn't do it in the exhibition match against Zuzu. But he still believed in Yuya and declares that he is one of Yuya's biggest fans.[3]

Later on, he along with Allie and Tate all asked to see a Pendulum Summon which Yuya had finally started to get used to, but they were interrupted by Sylvio Sawatari, who invited them to LID and offered the use of the Center Duel Field to Duel Yuya. After Sylvio forcibly took Yuya's Pendulum cards, Frederick, Allie, Tate and Zuzu were taken hostage on top of a suspension bridge in "Prison Tower of Darkville", and Frederick in particular nearly fell from the tower, to his extreme distress, but he was saved by Zuzu.[4] Yuya was able to rescue them win against Sylvio and get his cards back from him.[5] During Yuya and Sora Duel, he was impressed by Sora's Fusion Monster[6] and was surprised to find that Pendulum Monsters are sent to the Extra Deck when they are destroyed.[7]

When the LID accused Yuya of the attack on Sylvio and challenged them to a face off in order to clear his name, Frederick cheered Yuya[8] and the others on.[9][10] Later on in the Duel between Yuya and Declan, he was extremely surprised to see Declan's ability and was left speechless.[11][12]

During the Duels arranged by Nico Smiley to help Yuya to qualify for the Junior Arc League Championship, he along with Allie and Tate became Yuya's cheering squad and cheered for him during his Duels.[14][15][16][17][18][19] But on request by Nico, they stayed behind the scenes during Yuya's qualifying Duel against Gong,[20] but later on was allowed to go in-front and cheer him and congratulated Yuya when he won and finally qualified for the Championship.[21] 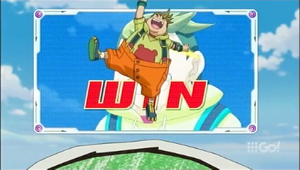 Frederick and the other students of You Show departed for the Arc League Championship, where he was to take part in the "Youth" division of the Championship. He had his first Duel on the first day itself against Trevor, and won it easily.[1] In the next round, however, he Dueled against Riley Akaba, who defeated him using a Synchro Monster.[2] Frederick apologized to Yuya for losing but he encouraged the young boy to give Riley "the shivers" the next time they Dueled. Frederick remained present throughout the rest of the Championship in Paradise Stadium, unable to leave for his own safety due to the Battle Royal, and unable to see what was going on during the Battle Royal as the feeds had all been cut.

After the Battle Royal, Yuya and Zuzu returned to Paradise Stadium, much to Frederick's joy. But to his shock, Henrietta Akaba cancelled the tournament, revealing to Frederick's panic that invaders from another dimension had attacked during the Battle Royal and the participants had fended them off. Seeing footage of the thought-to-be-missing Sora Dueling Yuya, Frederick believed that Sora had taken place in a revival Duel as Sylvio had. Yuya and Gong met up with them afterwards, explaining to Frederick's shock that Sora was indeed their enemy now and that Zuzu had gone missing and the girl that Frederick had seen was Celina, who resembled her. Frederick watch Yuya Duel his mother, and after Yuya won, he bid him farewell before he departed for the Synchro Dimension, watching from the riverbank with Tate, Allie, Skip, and Nico.

When a massive dragon appeared in a dimensional rift, Fredrick stared at it in shock.[22] He watched Gong Dueling through the rift, and he wondered what had happened to him after "Supreme King Dragon Clear Wing" destroyed all of his monsters.[23] Frederick wondered what Sylvio was doing and he was surprised to see "Supreme King Dragon Odd-Eyes". Frederick and the others were transported to the Fusion Dimension after the rift expanded and transported Paradise City there. When Skip noticed people in the air, Fredrick looked up and thought the Duelist who was Dueling Sylvio was Yuya.[24] While watching Declan Duel, Fredrick wanted Yuya to hurry and come home. Frederick was surprised when Z-ARC claimed that he was the true founder of Pendulum Summoning. Z-ARC almost defeated Declan, Fredrick wanted it to be a lie, believing that Yuya could never be a monster. He was surprised when he thought that "Z-ARC" had killed Declan and when Riley joined the Duel. When Riley used "En Flowers", Fredrick and the others watched as flowers appeared around them.[25]

Frederick uses a "Doodle" Deck which focuses on Beatdown tactics. The ace of the Deck, "Doodle Beast - Tyranno", can be Tribute Summoned using a single "Doodle Beast" Tribute, and activates its effects as soon as it is Tribute Summoned, allowing "Tyranno" to destroy a monster on the field and gain half its ATK, allowing him to deal a lot of damage to his opponent's Life Points. Frederick reinforces his deck with cards to protect his monsters to ensure a successful Tribute Summon.