Galixon Tazaki (ギャリクソン Tazaki Gyarikuson) is a character in the Yu-Gi-Oh! GO RUSH!! anime. He serves as a veteran member of UTS and is the primary caretaker of Yuhi and Yuamu Ohdo. 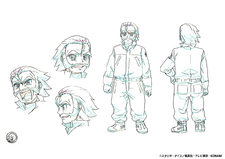 Lineart of Galixon depicting him from different angles.

Tazaki closely resembles Galian Townsend from Yu-Gi-Oh! SEVENS. He is a short and stocky elderly man, sporting dark gray hair and a prominent lamb chops beard of the same color. He is always seen wearing the signature UTS orange jumpsuit, with a dark blue t-shirt underneath it.

Tazaki has a lot of respect and loyalty towards Yuhi and Yuamu, likely due to his experience working under their father, and feels that it is his responsibility to ensure their safety. He's also shown to have a green thumb, being responsible for plowing the fields around the UTS property, as well as experience in handling heavy machinery.

Galixon uses an EARTH Machine Deck, comprised of monsters themed around digging and effects that take advantage of "Pierce!" to inflict piercing damage.