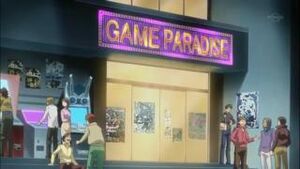 Game Paradise is a video game arcade in Yu-Gi-Oh! 5D's.

It unsuspectingly contains a secret database containing top secret Sector Security data hidden in its Turbo Dueling simulator, called Accel Simulator. Only a few people know it is here and nobody would think that a database with access to terminal stations would be in such a place. Even if someone is following someone else who wishes to access the data, the data will remain safe. Instead of a password there's a simulation Turbo Duel Puzzle, in which the user must beat Cup Ramen Man in two distinctive puzzles, with only 3 chances to do so.