The Game of Death was the third and final stage of Dark Yugi and Shadi's Shadow Game, the Trial of the Mind. Shadi tried to use it to expose trusting to much as a weakness in Dark Yugi's heart.

Shadi created an illusion of Katsuya Jonouchi who still had his bully persona, having caught a glimpse of him like this from Yugi's memories, when he visited his soul room. Jonouchi took the Millennium Puzzle from Dark Yugi and the ground around them disappeared creating a bottomless pit. The rules were each player took turns tossing the Millennium Puzzle and their opponent moved two floor tiles in the direction that the puzzle landed pointing.[1]

Although Dark Yugi was sure that this Jonouchi was another illusion, he worried that there was still a chance it could be the real Jonouchi, possessed like Yoshimori and Anzu. He tried talking Jonouchi out of playing the game, but Jonouchi taunted Yugi about caring so much for the Millennium Puzzle. For a split second Yugi regained control of his body and wept, causing two of the ushebti supporting Anzu to break.[1]

Jonouchi went first and caused Dark Yugi to move two spaces back. To Shadi's surprise, Dark Yugi refused to take his turn, saying he didn't want to play this game with Jonouchi. Jonouchi rolled again, sending Dark Yugi two more spaces in the direction of the pit, such that he was on the edge of their platform. Jonouchi offered Yugi his next turn, reminding him that if he might land in the pit next turn. Once again, Dark Yugi passed.[1] 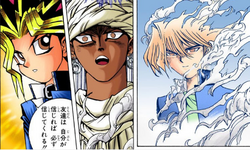 Shocked, Shadi asked why Dark Yugi was throwing the game and if it was because he admits defeat. Dark Yugi said that it wasn't defeat, but trust in his friend. Shadi insisted that Dark Yugi had lost because he was unable to defeat his past and that Dark Yugi's excessive trust was the weakness he was testing in this stage. Shadi said that trust is more easily broken than ushebti and friendship is nothing but weak hearts clinging together for solace. He claimed that true strength of the heart is the ability to believe in yourself and had Dark Yugi sent his friend to the pit, he would have gained that strength.[1]

Shadi ordered the illusion of Jonouchi to throw the puzzle one last time. However Jonouchi stood still and the illusion vanished. Dark Yugi explained that there is no past or present with friendship and if you trust your friends they will trust you.[1]