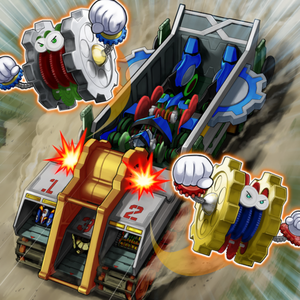 Like gears meshing together, "Geargia" gather in unison to enable enhanced effects.

Gears of Justice Dispatch! is the eleventh Solo Mode Gate in Yu-Gi-Oh! Master Duel, and focuses on the Geargia archetype.

Like most Gates in Solo Mode, each Duel can be played with either the player's own Deck or a provided Loaner Deck fitting the theme of the Gate, with separate rewards for each. Completing this gate for the first time unlocks the Shifting Gears Secret Pack for 24 hours.

Learn the ins and outs of the "Geargia" Deck.

This chapter serves as a tutorial for using Geargias.

Utilize the effects of "Geargiagear" and "Geargia Change" to Xyz Summon a variety of Machine-Types! Try to activate the Effect of "Number 27: Dreadnought Dreadnoid," which Special Summons a Rank 10 or higher Machine-Type Xyz Monster when an opponent's Monster is destroyed in battle.

A Deck that takes advantage of "Geargia," an archetype that can Summon Rank 4 Xyz Monsters easily, and uses "Rank-Up-Magic Limited Barian's Force" to Xyz Summon Rank 5 Monsters. Note that some Monsters work by using "Number" Monsters as Materials.

A Deck that combines "Geargias," "Gadgets," and "Ancient Gears." You can bring out some powerful Rank 3-4 Xyz Monsters with this Deck, but that's not all. Try combining the forces of "Platinum Gadget" with "Ancient Gear Ballista" to bring the Cards you need to your hand and Special Summon even more powerful Monsters.

A Deck that combines the versatility of "Geargia" with "Synchron" Tuners to enable Synchro Summons. Use the effects of "Geargiagear" and "Machine Duplicatio" to Special Summon multiple Monsters in preparation for Synchro and Xyz Summons.