Face off against the final boss!

"Generaider", known as "Generaid" (ジェネレイド Jenereido) in the OCG, is an archetype introduced in Deck Build Pack: Mystic Fighters. It is comprised of multiple Level 9 monsters of various Attributes and Types, and its playstyle revolves around swarming these Level 9 monsters using the effects of their Field Spell, "Generaider Boss Stage".

"Generaider" is a portmanteau of "general" and "raider". "General" refers to the archetype's theme of bosses accompanied by additional generic monsters. "Raider" refers to raids found in massively multiplayer online role-playing games (MMORPGs), specifically raids based around boss fights. 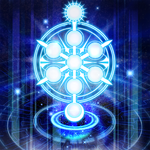 The "Runick" Spell Cards, which are also based on Norse mythology and video games, are related to this archetype, as evidenced by "Loptr, Shadow of the Generaider Bosses" appearing in the artwork of "Runick Allure", and the same characters appearing in both "Generaider Boss Fight" and "Runick Dispelling".

The deck can easily swarm Level 9 monsters, which can in turn be used to make powerful Rank 9 Xyz Monsters and/or Link Monsters that need high-level Link Materials; examples include the boss monsters of the deck, the Rank 9 "Jormungandr, Generaider Boss of Eternity" and "Laevateinn, Generaider Boss of Shadows", as well as the Rank 9 "True King of All Calamities", and even "World Gears of Theurlogical Demiurgy".

Notably, several "Generaider" cards, including "Frodi", "Boss Fight", "Boss Loot", "Boss Room", and "Jormungandr", have effects that cause the opponent to draw cards. Though this is a negative effect, some "Generaider" cards can trigger beneficial effects from it:

Due to their effect that also works with their corresponding Types, individual "Generaider" monsters can also be used in other Type-based decks to supplement their strategy. Such as "Hera, Generaider Boss of Doom" who can be used to supplement a Zombie-oriented strategy.