The following generic Duelists appear in the Yu-Gi-Oh! anime.

Duelists on this list are typically unnamed, serve a minor role, and appear in a single episode, but have dialogue or Duel a major character. 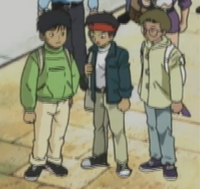 Duelists, who stood in the crowd in front of Pegasus Castle when the tournament was about to commence. They commented on the caliber of participating Duelists; Weevil Underwood, Rex Raptor, and Mako Tsunami, who were top three at the Japanese National Championship. They noted Seto Kaiba's absence and suspected one of the aforementioned three would win in that case, until one of the generic Duelists said he heard Yugi Muto, who had beaten Kaiba was participating.

In the Japanese ending credits, three of them are called as Duelist (デュエリスト Dyuerisuto) and voiced by Eiji Takemoto, Mika Ishibashi, and Masaru Hotta. 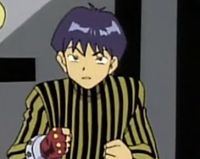 Mai Valentine's first opponent in Duelist Kingdom. Mai used her Aroma Tactics against him and won, taking both his Star Chips, eliminating him. Afterwards, he asked how she was able to tell what her cards were while they were still face-down.

In the Japanese ending credits, he is called boy (少年 shōnen) and voiced by Mika Ishibashi.

The character is based on a manga character; see Generic Duelist (Duel 69). Although his manga lines about going easy on Mai because she was a girl and saying he could not pay attention because of what she was doing with her cards were cut from the anime. 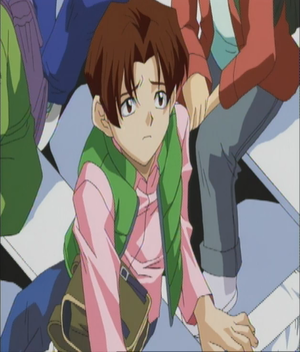 A participant in Duelist Kingdom, whose Deck and Star Chips were stolen by Mokuba Kaiba. He managed to acquire five Star Chips and wagered them in a Duel with Mokuba. Unbeknownst to him, Mokuba was not a tournament Duelist and had escaped captivity in Pegasus Castle. Mokuba immediately grabbed the Duelist's Deck and Star Chips at the beginning of the Duel and ran off.

Kemo noticed the Duelist had no Star Chip and attempted to disqualify him. Tristan Taylor saw the Duelist being grabbed and tried to fight Kemo off, but failed. Kemo explained that he had lost his Star Chips and needed to be removed from the island. The Duelist claimed that they were stolen, but Kemo said it did not matter how they were lost. He brought him to a rowing boat of other disqualified Duelists and threw him next to Weevil Underwood, who pushed him aside and talked down on him. Yugi Muto and his friends came to the boat's pier to ask for a description of the thief and said that he would catch him. Kemo said that the boat was leaving in 30 minutes and that would be their time limit. The Duelist thanked Yugi and his friends for their help. Joey Wheeler then said that he would be taking half the Duelist's Star Chips as payment, but claimed later that he was joking.

Although Yugi and his friends returned to the pier, with Mokuba and the Star Chips, Kemo had allowed it to leave early.

Two cards from the Duelist's Deck, "Crocodilus" and "Man-Eating Plant" were shown, when they were used by Mokuba.

In the Japanese credits, the Duelist is called Boy A (少年Ａ) and voiced by Mika Ishibashi.

The character is based on a Duelist from the manga; see Generic Duelist (Duel 73).

One of Mai Valentine's opponents in Duelist Kingdom. Mai found their Duel to be boring and effortlessly defeated him. The character is unseen and has a single word of dialogue; "damn".

Only one of his cards was shown. Its name was not mentioned and it was destroyed by Mai's "Harpie Lady Sisters" (called "Harpie Queens" in this instance).

In the Japanese credits, the character is called Duelist 1 (デュエリスト１) and voiced by Masaru Hotta.

The character is based on a Duelist from the manga; see Generic Duelist (Duel 77). 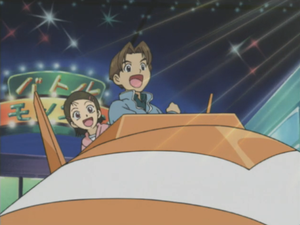 At Kaiba Land, a boy and a girl at a Duel Ring used "Barox" to defeat their opponent's "Morphing Jar".

The Japanese credits include two characters called child (子供 kodomo), who may refer to these children, and are voiced by Eiji Takemoto and Mika Ishibashi.

A messaged was posted on the internet, which read Duelists, gather at the city where ancient Duelists and card carvings sleep and was accompanied by a time and date to meet up. This was understood to mean an announcement of a Duel Monsters tournament was to be made in Domino City. Duelists from all over Japan gathered in a spot in Domino City on that date. Yami Yugi was unaware of the announcement, but was in the area and began to sense the presence of the Duelists. Seto Kaiba soon appeared to the Duelists on monitors throughout the city and announced that Battle City would be taking place on the streets and entrants would need a Duel Disk to participate.

In the Japanese ending credits, two of the generic Duelists are called Duelist (デュエリスト Dyuerisuto) and are voiced by Junichi Miura and Makoto Tomita. 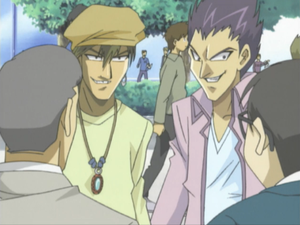 Generic Duelists talking to the passersby

At the commencement of the Battle City tournament, a group of Duelists gathered at Domino City Plaza. Two of them overheard Dan and Bob, who were puzzled by the presence of Duelists and their Duel Disks. The two Duelists approached them and explained that starting today, the city was to become Battle City, a battlefield for Duel Monsters and warned them to walk on the edge of the sidewalk if they did not want to get hurt. (In the English dub, the Duelists told them what the Duel Disks were called and that they were part of Battle City, the greatest Duel Monsters competition of all time. They then said to step aside because the Duelists were taking over the town.)

In the Japanese ending credits, the two generic Duelists who spoke to the passersby are called Duelist (デュエリスト Dyuerisuto) and are voiced by Takahiro Hirano and Makoto Tomita.

The two Duelists with speaking roles are based on characters from the manga; see Generic Duelists (Duel 152). 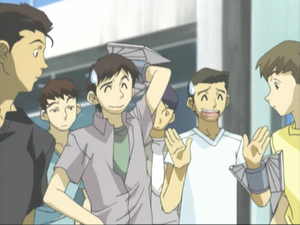 As Espa Roba looked for opponent following his victory over Rex Raptor, two Duelists declined. One of them remarked "I'll pass". The other said "I can't win if you use ESP to see my cards". 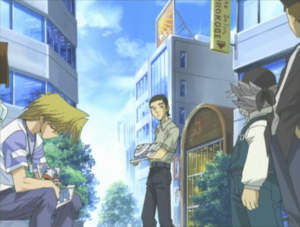 A Duelist was eyed by Téa Gardner, Tristan Taylor, and Solomon Muto as a prospective Battle City opponent for Joey Wheeler. However Joey was disinterested, as he wished to qualify for the finals by defeating stronger opponents.

Two Battle City participants faced each and had "Leogun" and "Armored Lizard" on the field respectively.

In another Duel, one Duelist had his "Sword Hunter" attack and destroy his opponent's "Two-Headed King Rex". This Duel obstructed someone who was trying to drive to work, but a policeman explained to him that traffic in the city had been restricted for the KaibaCorp event. As the driver got ready to drive away, he was startled by an "Electric Lizard" Summoned by a Duelist.

In the Japanese ending credits, one of the Duelists is called Duelist (デュエリスト Dyuerisuto) and voiced by Mika Ishibashi. 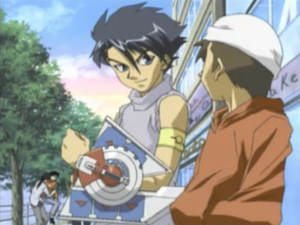 Tristan Taylor approached a Duelist to inquire about the location of the Battle City finals. However the Duelist only had one Locator Card, meaning he had not qualified and did not know the location.

A Duelist was mugged by Yami Bakura, who then stole his Duel Disk. The Duelist had not participated in any Battle City Duels and as such still had his single Locator Card, which he planned on keeping as a souvenir. Yami Bakura considered him lame for that reason and was surprised to find a Duelist like that, but was ultimately glad as it meant the Duelist still had a Locator Card he could steal and use to take part in the tournament. Yami Bakura then looked through the Duelist's Deck, but called his cards lame and threw them back at him. (In the English dub, the Duelist had intended to use his Locator Card to keep Dueling and try to get into the finals.)

Another generic Duelist entered Domino City Cemetery at night, having heard there was a Duelist he could face there. However Bonz, Zygor, and Sid in turn scared him by surprising him while wearing monster masks. They then surrounded him and ordered him to drop his Duel Disk, which contained his Locator Card. The Duelist complied and ran away in terror.

In terms of role as Bakura's theft victim, the first Duelist is based on a character from the manga; see Generic Duelist (Duel 178 and 183). However his personality and appearance are different than the manga character.