The following generic Duelists appear in the Yu-Gi-Oh! manga.

The term "generic Duelist" ( ippan Dyuerisuto) is used in the "Duels" section of Yu-Gi-Oh! Character Guidebook: The Gospel of Truth as a placeholder for the names of minor characters. With the exception of one, all of them are opponents of Mai Kujaku.

Other minor Duelists that interacted with major characters are also listed here. 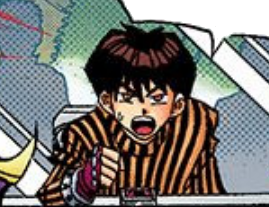 Mai Kujaku's first opponent in Duelist Kingdom. Mai used her Aroma Tactics against him and won, taking both his Star Chips, eliminating him. She proceeded to call him a little boy and tell him to run home to his mommy. He claimed to have went easy on her because she was a girl and that he was also put off by what she was doing with her cards. He then demanded to know how she was able to tell what her cards were while they were still face-down, but Mai said it was her secret.

He appears in the anime, where he is credited as boy; see Generic Duelist (episode 6). A participant in Duelist Kingdom, whose Deck and Star Chips were stolen by Mokuba Kaiba. He managed to acquire five Star Chips and wagered them in a Duel with Mokuba. Unbeknownst to him, Mokuba was not a tournament Duelist and had escaped captivity in Pegasus Castle. Mokuba immediately grabbed the Duelist's Deck and Star Chips at the beginning of the Duel and ran off.

Saruwatari, who had been searching for Mokuba, noticed the Duelist had no Star Chip and attempted to disqualify him, despite his claims that the Star Chips were stolen. Saruwatari cited that how he lost them was irrelevant. The commotion was overheard by Katsuya Jonouchi, who said he would catch the thief and told Saruwatari not to kick the generic Duelist off the island, while he did that. However Jonouchi added that he would take half the Duelists Star Chips as payment for catching the thief.

Despite saying he would think about Jonouchi's offer and secretly knowing Mokuba was the thief, Saruwatari brought the generic Duelist to a rowing boat, where he was forced off the island, with other disqualified players, including Insector Haga, who talked down on the others.

Two cards from his Deck, "Crocodilus" and "Man-Eating Plant" were shown, when they were used by Mokuba.

He appears in the anime, where he is credited as Boy A; see Generic Duelist (episode 8). 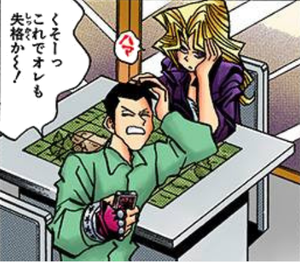 One of Mai Kujaku's opponents in Duelist Kingdom. Mai found their Duel to be boring and effortlessly defeated him, eliminating him from the tournament.

Only one of his cards was shown. Its name was not mentioned and it was destroyed by Mai's "Harpy Queens".

He appears in the anime, where he is credited as Duelist 1; see Generic Duelist (episode 11). 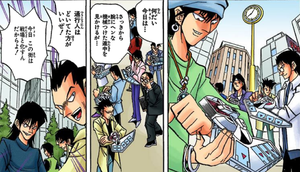 Generic Duelists and the passerby

A group of Duelists gathered at Domino City Plaza for the beginning of the Battle City tournament. A passerby wondered what was going on, who the people were, and what their Duel Disks were. One of the Duelists heard him and said that passersby better keep their distance as the city was about to become a battlefield.

The Duelist who spoke to the passerby and another who had no dialogue in the manga appear in the anime, with speaking roles where they are both credited as Duelist; see Generic Duelists (episode 56).

An opponent of Koji Nagumo in the Battle City tournament. He lost the Duel and was prepared to give Koji the card he had agreed to ante at the beginning of the Duel. However Koji decided afterwards that that card did not compare in value to his "Hyozanryu". Koji demanded that the Duelist give him a card of equal value to "Hyozanryu" or or ¥100,000 (about US$900 at the time) and threatened to beat him up and break his fingers if he did not comply.

Mokuba Kaiba intervened, deemed the original ante to be legitimate and said that it was against the rules to change the ante after the Duel or bet money. Seto Kaiba also Dueled Koji after he disrespected Mokuba. Following that Duel, Koji sat on the street with his cards scattered, traumatized by the power of "The God of the Obelisk". The generic Duelist, also in shock, picked up the card he had lost to Koji, tore it up and walked away.

Only one of his cards was shown. It was the card he anted and its name was not mentioned.

In the anime, he is called Akira. 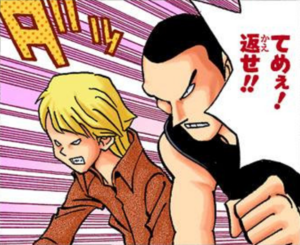 Duelist (left) and his companion

Dark Bakura attacked a Duelist and stole his Duel Disk, but did not find any worthwhile cards in his Deck.

The Duelist later found Ryo Bakura and identified him to a companion as the guy who stole his Duel Disk. The two tried to forcefully take back the Duel Disk. Marik Ishtar, under the alias "Namu", tried to stop them pointing out that Bakura was injured. However the two attacked Marik until Katsuya Jonouchi intervened and beat up the two attackers. Marik used this exchange as a means of getting closer to Jonouchi and Anzu Mazaki.

A character based on this Duelist appears in the anime. However the anime character differs in appearance, is more afraid of Bakura and does not seek him out to get back his Duel Disk; see Generic Duelists (episode 79). 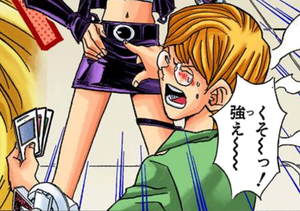 An opponent of Mai Kujaku in Battle City. By defeating him, Mai qualified for the finals.