Sir Gill de Randsborg, known as Jill deLauncebeaux (ジル・ド・ランスボウ Jiru Do Ransubō) in the Japanese version, is one of Goodwin's 5 Dueling Assassins placed in the Fortune Cup with the intent of exposing the Signers, as well as a member of Iliaster.

A large, fearsome man, Randsborg is decked out in the armor of a medieval knight. A customized Duel Disk serves as his shield.

He claims to be a blood descendant of a family of medieval knights (in the dub, he is just a cosplayer). He speaks in Elizabethan English, which is much more prevalent in the dub (saying things such as "I activate my monster's ability most special"), where it is an act. His personality is self-righteous, and he sees it as his duty to defeat the Black Rose Witch. He disobeyed some of his orders from Goodwin because the real reason he decided to battle in the Fortune Cup is to win the tournament itself. 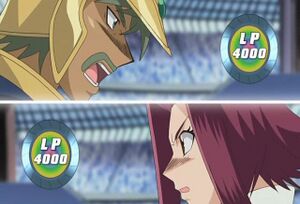 During the Duel, Randsborg quickly falls victim to Akiza's powers which make the Duel real, and collapses after receiving a powerful attack from Akiza's "Black Rose Dragon".[1]