The Goha President (ゴーハ Gōha Shachō) is a character in the Yu-Gi-Oh! SEVENS anime. He is the mysterious president of Goha Enterprises and subsequently the de facto ruler of Goha City. The stress of his job eventually gets to him, and he is discarded by the President Drone. 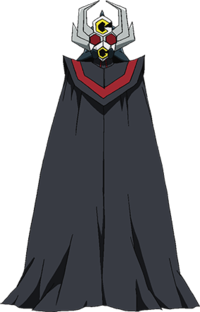 The President conceals his identity beneath the President Drone; a helmet with a design reminiscent of a samurai helmet, with the Goha Enterprises logo emblazoned on his helmet's forehead and mouthpiece, hexagonal red eyepieces, and silver horns in half-hexagonal shapes. Reportedly, no-one at Goha Enterprises has ever seen his face. He also wears a black mantle with a red stripe across the chest, and black clothing and gloves underneath it.

Beneath his helmet, the President is an old man with short grey-brown hair.

Despite being the de facto ruler of Goha City little is known about the President's personality. The installation of Rush Dueling in defiance of his company's rules seems to have amused him more than anything, though he later declares that it is the enemy of his company and that it must be crushed. In his first few appearances, he does not say anything, he merely laughs.

The revelation that the President Drone has been aiding the President adds even further ambiguity to his personality, as the Drone advises him on the best course of action for Goha Enterprises to take.

The President was informed by one of his employees that Rush Dueling rules had been installed into Duel Disks by a user. The employee asked the President about their course of action, but he simply laughed at the notion and entered his office. He took a call from an excited girl telling him that Rush Dueling was really fun, laughing at her message as well.[2] The President began making efforts to censor Rush Dueling, deleting any videos of it that were posted on the internet and laughing as his employees carried out the task.[3]

The Tops of the Hexagon soon obtained information on the creator of Rush Dueling, Yuga Ohdo, and the President pointed out his notebook on the cover of the Goha #7 Elementary newspaper that claimed to contain the secrets of Rush Dueling. Mimi Imimi went undercover at Goha #7 Elementary to steal the notebook from Yuga, but it only contained his sketches on his Roads rather than any concrete information, much to the President's amusement.[4]

During the Duel between Yuga and Roa Kassidy, the legality of Yuga's ace monster "Sevens Road Magician" was called into question and the company began receiving calls from curious Duelists as to whether it was real. Mimi attempted to resolve the issue on-site, but had difficulty until the Preisdent called her and reminded her of Goha Duel Rule Number 66 Article 66, which permitted a Duel to continue until the illegal card in question was drawn, upon which point the player would lose.[5]

Nail Saionji undertook efforts to penalize the accounts of Yuga Ohdo and his allies, but despite creating Maximum Summoning in his efforts after defeating the Tops of the Hexagon, he failed to do so. The Tops of the Hexagon met with the President to discuss Nail's supposed betrayal, but Nail interrupted the meeting to confirm that he had not betrayed them, merely recognized the potential in Rush Dueling. The President called Nail naïve, declaring that Rush Duels were an enemy of Goha Enterprises and that they should all be working to crush them.[6]

After he demoted the Tops of the Hexagon for their actions against Nail, and Mimi for failing to keep them in line, the stress of his job finally got to the President, and he collapsed in his office.[7] Mimi later came to his office to complain about being demoted, but only found the President crumpled on the floor.[8] The President Drone detached itself from the former President, declaring him unable to continue his duties and offering his position to Mimi instead.[7]