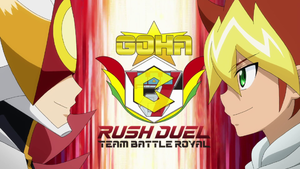 The Goha Rush Duel Team Battle Royal (ゴーハ・ラッシュデュエル・チームバトルロイヤル Gōha Rasshu Dyueru Chīmu Batoru Roiyaru) is a Rush Duel tournament held at the Goha Stadium in Goha City in the Yu-Gi-Oh! SEVENS anime. Participants must enter in teams of three, and the winner of the tournament will be crowned King of Duels.

The tournament was arranged by the Goha Corporation to allow them to claim ownership of the Rush Duel format and turn its popularity to their advantage, following their failure to eliminate the format or destroy its popularity, at the suggestion of an unknown individual.

The preliminaries take place over the span of two days across Goha City. All participating teams have three people, and if a team comes across another team in the city, a Duel will begin in the Battle Royal. The winning team gains seven points, while the losing team loses seven points. If a team loses seven times, they are eliminated from the tournament. The two teams with the most points by sundown on the second day advance to the finals.