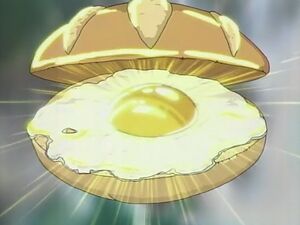 The Golden Eggwich is a type of food made in Duel Academy's cafeteria. It is highly desirable among the Academy's students, as the Duel Academy's Golden Hen lays only one golden egg per day, which is cooked and placed amongst the rest of the drawbread in Duel Academy's shop. Jaden Yuki was especially skilled at obtaining this sandwich, successfully, "drawing" it for more than a week straight at one point. He suddenly stopped drawing it and it was discovered that Damon had been stealing it. Jaden tracked him down and defeated him, returning him to Duel Academy in the process.[1]

When Syrus Truesdale fails to master the use of his brother's Deck, Jaden buys him a bag full of drawbread. Eventually, he draws the Golden Eggwich. This boosts his confidence enough to master the Deck.[2]

During his first duel with Kalin Kessler, Yusei's flashbacks in the dub of Yu-Gi-Oh! 5D's show Kalin making a remark saying he needs to stop eating so many eggwiches, most likely a Golden Eggwich reference.

In the first two Tag Force games, the Golden Eggwich is similarly popular and rare, able to be gotten only once per day; when you are able to get one, for the first one received, you are able to unlock a card pack at the Academy store, and if given to your partner, it will raise their heart meter up one full heart, regardless of which character is your partner. Its icon in the sandwich game is the standard egg symbol with wavy lines above it, and when you get it, a special animation is played to confirm your choice.