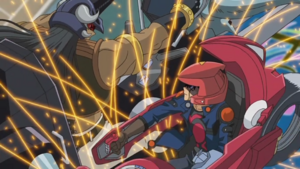 The Goodwin assassination attempt was a failed plan of Greiger's aimed at killing Rex Goodwin in the Yu-Gi-Oh! 5D's anime.

Greiger believed that Goodwin was responsible for the destruction of his home village in an attempt to summon the Crimson Dragon. However the souls of the villagers had really been taken by the Dark Signers.[1] 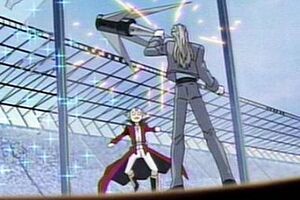 During the Fortune Cup after being defeated by Yusei Fudo, the spike from Greiger's "Chariot Pile" card remained intact on his Duel Runner, The Beast. Greiger showed the audience images of his village after the destruction. He then mounted his Duel Runner, drove it around the circuit and ramped in the direction of the tower Goodwin was inside. However Yusei had deduced his plan and rode around the circuit too and collided with Greiger mid-air, preventing him from crashing into the tower. During the collision, the "Chariot Pile" spike broke off The Beast and flew through the window of the tower. Using his mechanical hand, Goodwin caught the spike and stopped it spinning. The audience were unable to see Goodwin do this, but Jack Atlas who was in the same room first learned of Goodwin's mechanical arm then.[1] Greiger was arrested after the assassination attempt.[2]