Grace Tyler (グレース・タイラー, Gurēsu Tairā) is a character in the Yu-Gi-Oh! ARC-V anime. She is a member of Duel Academy who was sent to the Xyz Dimension with her elder twin sister Gloria to defeat the Lancers. 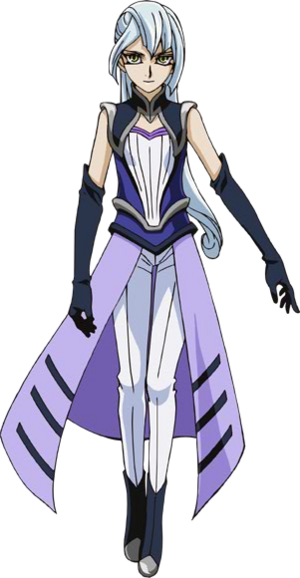 Grace is a fair-skinned woman with yellow eyes and long silver hair that hangs over her forehead in a messy fringe and two locks extending to chin length, while the back portion of her hair extends down her back and curls up in a bunch. Grace wears a more feminine outfit than her sister. She wears a sleeveless tight blue coat with a white front that is patterned with vertical lines and topped with purple curves; silver-lined grey shoulder pads over her coat, and black gloves that extend past her elbows. Grace also wears a lilac skirt with three diagonal black lines on each side over white leggings and black ankle-length heeled boots with silver heels and toes.

Grace is more softly spoken than her sister, and she frequently comments on the fun that they will have. In the dub, Grace speaks in a stereotypical Valley girl manner. She is confident in the skills of her and her sister, and encourages the thought of a stronger opponent while disliking weaker opponents. This extends to the liking that she takes to Yuya's Dueltaining. While Gloria tends to be blunt, Grace is somewhat more sarcastic and insulting and can be air headed at times.

After losing to Yuya Sakaki and Shay Obsidian in an Entertainment Duel, Grace is thrilled by the Duel and intrigued by Yuya's potential to the point of forgoing the opportunity to rejoin the effort to defeat the Lancers in favor of watching Yuya's Dueling. She enthusiastically cheered for Yuya during the Duel against Aster, despite her sister's disapproval. She takes the loss and the backup by the Obelisk Force in stride; unlike her sister she does not see it as an insult given that they actually did lose.

Grace and her older sister Gloria are infamous among the Resistance for almost destroying the Spade Branch's Resistance force.[2]

After hearing Mamoru's report that claimed to have detected Pendulum Summoning, the Professor assigned Grace and her sister Gloria to go to the Xyz Dimension with the mission of defeating the Lancers.[1] While walking through Heartland, Grace and Gloria found Saya and believing her to be a Lancer, prepared to bring her back as a present for Aster and Mamoru. When Allen arrived to protect Saya, Grace and Gloria challenged them to a Tag-Team Duel. During the Duel, when Gloria wondered why Allen and Saya didn't use Pendulum Summoning, Grace suspected that they were underestimating them. After Saya's "Fairy Cheer Girl" failed to destroy "Amazoness Queen due to its effect, Grace and Gloria realized Allen and Saya were not their targets. When the twins learned that Allen and Saya were from the Resistance, they revealed that they were the Tyler sisters. Grace Fusion Summoned "Amazoness Pet Liger" and attacked "Cheer Girl" with "Liger" and "Queen", lowering Allen and Saya's LP and the ATK of "Cheer Girl" at the same time to toy with them for their own amusement. Allen attempted to use the effect of "Heavy-Armored Train Iron Wolf" to attack the Tyler sisters directly, but they explained that the effect of "Liger" would negate the attack. Grace then used "Amazoness Substitution" to switch the attack to Gloria's "Amazoness Swords Woman", intending for Allen to take the damage Grace would have taken. However, she and Gloria were surprised when Saya used "Fairy Rail" to turn the damage into ATK for "Cheer Girl". Though slightly impressed by their opponent's turn, the twins won the Duel after Gloria used the combined effects of "Liger" and "Amazoness Empress" to inflict piercing damage. After defeating Saya and Allen, Gloria and Grace prepared to seal them into cards until Gong and Sylvio arrived. When they learned Gong and Sylvio were Lancers, Gloria and Grace challenged them to another Tag-Team Duel.[2] 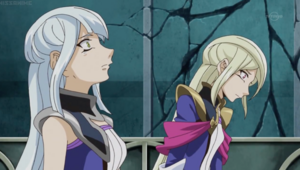 Grace and Gloria shocked by Yuya's Dueltaining after their defeat.

After defeating Gong and Sylvio, Grace and Gloria spotted Yuya and Shay arriving. They thought Shay was a scared Resistance member who fled when he recognized their "Amazoness" Decks until Yuto (through Yuya) told them things would've been different if they were there. The Tyler sisters told them not to overestimate themselves. The Tyler sisters challenged them to a Tag-Team Duel and Gloria used "Quiet Life" and "Amazoness Hall" for them to gain LP from Yuya and Shay's Special Summoned monsters ATK. Grace Fusion Summoned "Amazoness Pet Liger" and destroyed "Performapal Monkeyboard" while inflicting piercing damage with "Empress'" effect. She then used "Amazoness Empress" to destroy "Xiangsheng Magician" and set two cards. The Tyler sisters gained more LP Shay when Pendulum Summoned three "Raidraptor - Singing Lanius'" and Xyz Summoned "Raidraptor - Rise Falcon". They were surprised by Rise Falcon's effect but were able to protect their monsters from destruction with their effects. Grace admitted that Shay was above average for a Resistance member but Gloria said their effect was for naught. She then activated "Amazoness Hot Spring", gaining back the LP they lost and "Amazoness Curse Mirror", negating battle damage they take to 0. After their LP raised up to 7000, Grace told them to give up and become a card like their comrades. When their LP went over 10,000, the Tyler sisters started to get annoyed with the Lancers and told them to surrender already. When Yuya activated "Miracle Rocket Show" and "Smile World" they were surprised by their effects. Even when Yuya and Shay used "Rise Falcon" and "Dark Rebellion Xyz Dragon's" effects to weaken "Empress" and "Liger", Gloria pointed out it that their attack will still be negated. However, Yuya used the last effect of "Miracle Rocket Show" to inflict damage to the sisters equal to the battle damage that was reduced to 0. Though defeated, Grace and Gloria were amazed by the Duel.[3]

Grace annoying Gloria when she supports Yuya during his Duel against Aster.

When the Obelisk Force challenged the Lancers to a Duel, Grace and Gloria learned from Mamoru that the Professor sent them in case they lost. Gloria was insulted, but Grace admitted that they did lose. Gloria asked Grace if she wasn't frustrated by their loss, but Grace didn't care as she wanted to see Yuya's Dueltaining. Gloria wondered whether or not they should join the Duel, but Grace told her the Obelisk Force wouldn't lose easily. Grace was impressed when Yuya used "Big Escape" to escape the Obelisk Force's attack, and after Yuya Pendulum Summoned, Grace was ready for another great Duel, but disappointed after the less elaborate turn. She watched as "Chaos Ancient Gear Giant" was Fusion Summoned and Kite Tenjo arrived to save Yuya. She was surprised when Kite defeated the Obelisk Force and Aster arriving with a squad, claiming that Yuya was his target.[4] When Aster refused to listen to Gloria, Grace told him Yuya's Dueltainng won't be exciting unless he Duels them. Grace was impressed by Yuya's Pendulum Summoning on his first turn, but Gloria wanted to help the squad Dueling Kite, though Grace continued to watch the Duel. Grace wanted Yuya to show them the greatest Duel and she was impressed when he Fusion Summoned "Brave-Eyes Pendulum Dragon". When Gloria thought it was over for Yuya, Grace eagerly claimed that he would entertain them more.[5] When Yuya was about lose she was disappointed. When Gloria mentioned "Destiny HERO - Dystopia" and "Urban Demise" combo, Grace also mentioned that attacking will trigger their effects and destroy the monster. She then wonder what Yuya will do. When Gloria wonder why Yuya would attack with "a weak monster", Grace told her it's part of his Dueltaining. However when Aster destroyed "Laugh Maker", Grace thought it was Yuya's comeback. She was happy when Yuya was about to perform, understood his plan to revive "Laugh Maker", and seeing "Smile World" again. She was also surprised when Yuya raised "Laugh Maker's" ATK to 6900. When Yuya brought back "Brave-Eyes" to attack, Grace mentioned that if connects, he'll win. When Yuya defeated Aster, she called the fireworks beautiful and the Duel amazing. While Gloria was worried about the Professor finding out, she wasn't.[6]

Just as Mamoru ordered the Duel Academy soldiers whom he had called to attack Yuya, Aster defended the latter and openly declared his intention to betray the Professor because now he was sharing the same belief as Yuya and his father that Dueling wasn't a tool for conflict, but to bring happiness to people. Instead of panicking, Grace was impressed by Aster's decision to betray Duel Academy, making her sister to ask if she was also going to do the same and become the Lancers' ally. Grace, however, corrected her sister, stating rather than the Lancers' ally, she was more delighted at the idea of becoming Yuya's ally. She urged her sister to be honest with herself, teasing her of the fact that she was also charmed by Yuya's Dueltaining, flustering Gloria, and the two of them then joined Yuya with Aster. The Resistance's arrival and Aster's speech forced Mamoru to surrender and the remaining Duel Academy soldiers to follow Aster's plan of rebuilding Xyz Dimension.[7] 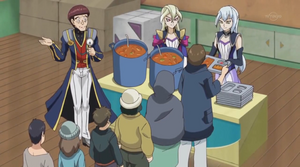 Gloria, Grace, and Mamoru distributing food to the Resistance.

Now officially allied with both the Resistance and Lancers, Grace, her sister, and other former members of Duel Academy helped the refugees in the Resistance's hideout by distributing foods, medical supplies, and rebuilding residential houses for free to atone for what they have done. Grace and her sister helped in making and distributing foods to the refugees, making Gloria questioned why she has to do this, to which Grace answered that making people happy is part of Entertainment, so they should think about it as a training.[7]

Following the battle against Z-ARC, Grace appeared during Yuya and Dennis McField's with Gloria, Mamoru, and Aster and called out to Yuya. When Dennis attacked "Odd-Eyes Pendulum Dragon", Grace wondered why since "Performage Trapeze Magician" and "Odd-Eyes" had the same ATK. When Gloria thought it was over for Yuya, Grace told he would go for an Action Card. She and Gloria then noticed three kids who wanted to watch the Duel and Grace smiled as Gloria let them go up front to watch it. When Yuya weakened "Trapeze High Magician", Grace noted that Dennis didn't have any Set cards. However, when Dennis used the effect of "Trapeze High Magician" again to protect himself, Grace wondered how would Yuya break through it. She applauded at the end of the Duel when Yuya won.[8] Grace was later seen watching Yuya's Duel against Jack Atlas with Gloria, Mamoru, Aster, Kite, Allen, and Saya, waving to Yuya as he passed them.[9] She also watched Yuya and Declan's Action Duel.[10] Grace was happy that Yuya won both Duels and was sent to the Pendulum Dimension by Ray Akaba to witness her revival as Zuzu Boyle.[11]

Grace uses an "Amazoness" Deck. She also takes a more protective approach in Duels, relying more on Spell and Trap Cards, in contrast to Gloria.